Last night, we were shocked when our phones started buzzing and beeping because Megyn Kelly asked Ben Carson why he’s not dropping out of the Presidential race already…  and used David’s article to do so.  Oh yeah, and it was on live television.

I want to ask you about a piece in “National Review” by David French in which he wrote the following…  He was addressing you and addressing Governor Kasich.  What he wrote was “being a Christian candidate is more than life and liberty and the family. It means being humble and self aware enough to know when your vanity is hurting the country. It’s time to deny self, admit defeat and leave the race.”

Carson: My thoughts are that the political establishment, the pundits like to think that they’re in control, and it’s really we the people who should be in control. And — I believe there’s still a possibility that we can sort of break the spell that they have over the people. You know, bear in mind that, you know, it’s sort of like, you know, why do I stay here? It’s like losing a child. If you’ve ever known someone when’s lost a child, it’s a horrendous thing. You would do anything to keep it from happening. I feel like we’re in the process of losing our country. It is in critical condition right now and I don’t see anybody else who really is going to do anything about it. One of the real reasons that we are in critical condition is because we’ve had so many people who are controlled. You know, they either are on a puppet end of the string or the puppet-master end of the string, and as a result of that, things that are done are not necessarily the things that are the most beneficial things for we the people. And that’s one of the reasons that I totally refuse to accept money from special interests and billionaires who want to control things. They are the problem. and anybody who is associated with them is going to continue to do their bidding, and we are going to continue to go down the same road and can’t afford that.

Well, David weighs in this morning on Carson’s response to his piece:

I admire Dr. Carson greatly and have written extensively defending him from a barrage of malicious and ill-founded personal attacks. He’s an American hero. At the same time, however, everything he said above reaffirms my view that he’s not exercising good judgment by staying in the race. His vanity may well be getting the best of him.  Dismissing me as part of the “establishment” isn’t an argument — it’s an attempt at an insult. It’s a classic rhetorical dodge, where one attempts to diminish the message by discrediting the messenger.

I’m not going to debate whether I’m part of the establishment, but the notion that I think I’m “in control” is utterly absurd. I simply made an argument. The only power that I have is the power to persuade — and that’s exactly the same power Carson is trying to exercise in his response. I made my case. He made his. There are no puppets, and there are no puppet-masters.  Carson’s case, however, is simply stunning. He says that our country “is in critical condition right now and I don’t see anybody else who really is going to do anything about it.”

Look, I understand that every politician who runs in good faith for political office believes that they’re well-qualified — maybe even best-qualified — for the job, but the notion that he or she is the lone person who can right the country’s wrongs should be alien to any Christian candidate.

Read all of it here. 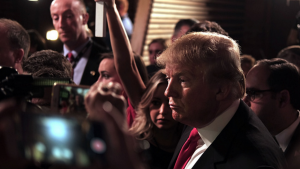 February 25, 2016 #GOPDebate: Does Trump have a point? Are the audiences packed with anti-Trump lobbyists and donors?
Recent Comments
0 | Leave a Comment
Browse Our Archives
Related posts from The French Revolution