Three reasons King David should be called “rapist” and not “adulterer”

King David was a “man after God’s own heart,” but he was also an adulterer and a murderer, as many preachers remind us over the course of our lifetimes. But as many sermons as I’ve heard about the topic, I’ve never heard a pastor address what I now realize is true: King David was NOT an adulterer; he was a rapist. Minimizing his sin does a disservice to women and to God.

Over the past few months, I’d been writing a great deal about holding Bill Clinton responsible for his sexual behavior — both when he was President and when he was Attorney General of Arkansas.  Perhaps that’s why, as I came across 2 Samuel, the famous story of David and Bathsheba struck me anew.  I realized I’d been wrong about the severity and the tragedy of the incident…  And by “incident,” I mean rape.  Think that’s too strong of a word?  Let’s revisit the story to refresh our minds on the details of what happened:

One evening David got up from his bed and walked around on the roof of the palace. From the roof he saw a woman bathing. The woman was very beautiful, and David sent someone to find out about her. The man said, “She is Bathsheba,the daughter of Eliam and the wife of Uriah the Hittite.” Then David sent messengers to get her. She came to him, and he slept with her. (Now she was purifying herself from her monthly uncleanness.) Then she went back home.  The woman conceived and sent word to David, saying, “I am pregnant.”

You know what happens next.  King David tries to cover up the sex, luring her husband home from battle to entice him to have sex with his wife. He was hoping the baby could’ve been passed off as Uriah’s instead of his own.  King David even gets Uriah drunk, but her husband — a man of honor and dignity — won’t betray his fellow soldiers by going home to his wife while they’re out in the field.

David then has him killed in battle.

There’s a lot of tragedy in this story. Uriah was an innocent man who bravely defended his nation by obeying the orders of a King who would later kill him.  But the person who’s overlooked most in this story — and mischaracterized by history — is Bathsheba.

Imagine the scene.   You are a married woman at home doing the purification rituals ordered by your faith.  The next thing you know, you’re being summoned by the most powerful man in the nation for sex.  Could she have said no?  David T. Lamb points out that women didn’t say no to men back then — certainly not to kings.  Though the 1951 film David and Bathsheba portrays the beautiful Bathsheba as the enticer, Lamb asks, “why blame her? She could have been fully clothed and using just a bowl. The text doesn’t say she was naked. And the text doesn’t say she knew she was being watched.”

It’s hard to tell by the Scripture above whether she was “into it” or not, right?  But the second half of the story shows who was really to blame:

While the first part of the story leaves some room for speculation — did she seduce the King? — the totality of the story shows that Bathsheba was actually a rape victim.  Imagine her heartbreak after David — as the New King James version describes it — “took her.”  Within weeks, she realized she was pregnant with a child who was not her husband’s. “Based on the huge power differential between the king and his subject, it’s more accurate to call this power rape rather than adultery,” Lamb points out. “Bathsheba couldn’t say no. She didn’t even have a choice.” So, she’s raped, impregnated, her husband is killed by her rapist, and her baby dies.  Then, for thousands of years, preachers use her in sermon illustrations and artist portray her as a seductress. 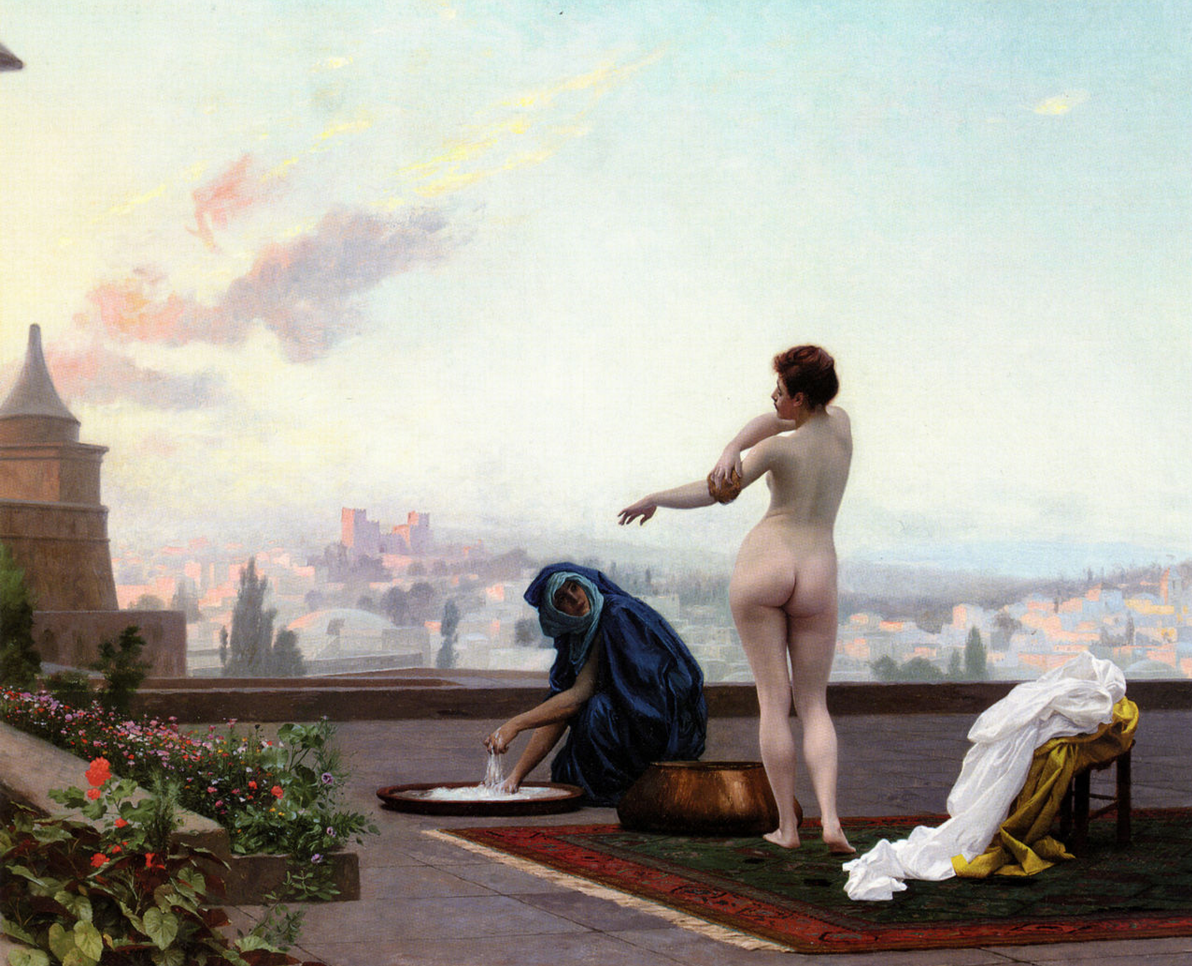 Note that the Bible says it was later in the evening when David saw her — that he had to get out of bed to watch her — but his depicts her as bathing naked in the open day light.  (As do most of the other paintings of the event.)

But even worse than artists’ depictions of Bathsheba, is the way we frequently talk about her in Christian circles.  My fellow Patheos blogger Libby Anne points out a really disturbing passage from “Created to Be His Help Meet,” by Debi Pearl.  Check out page 207 of the marriage manual, popular in many Christian homeschool circles and in many churches at the time of its release in 2004 (emphasis mine):

Because Bathsheba was indiscreet, she caused great calamity, resulting in the bloodshed and suffering of many. Her lack of discretion cost her husband his life, his comrades-in-arms their lives, her baby son his life, and the integrity of one whom God upheld as a man after his own heart. By simply doing what she thought she had a right to do, she was complicit in bringing ruin on an entire family line, including rape, incest, rebellion, and murder. David should have been with his men, but he was not out looking for a woman. She provided the opportunity for him to lust by her lack of discretion in where she chose to bathe. Her beautiful body won out in a contest between his flesh and his love for God. Generations have associated the name of Bathsheba with a wicked woman, yet she was the wife of a fine military man. All she lacked was modesty and discretion. Too often in life, many tragedies would never have taken place, if only…

Also, Bathsheba is featured in a book by Liz Curtis Higgs called Really Bad Girls of the Bible: More Lessons from Less-Than-Perfect Women

in which she’s described as a “bathing beauty” and a “shady character.”

Even if pastors don’t go that far in ascribing blame to Bathsheba, they do insinuate she was an active participant in the evil that occurred by describing the incident as an “affair.”

Why is it a big deal to blame Bathsheba?  At least two reasons:

The most frequent protest I hear of this argument is that “she could’ve said no.”  I think Lamb’s response here is fitting:

@NancyAFrench @devyngilmore Uriah said No. Look what happened to him. She could have said No and suffered the same fate.

Dear Christian friends, it’s time to rehabilitate the image of this woman of the Bible, the mother of Solomon, by refusing to call David an adulterer.  He was a rapist.

But the story doesn’t end there.  The ramifications of David’s sin were great.  His child died, then later two more of his sons, Amnon and Absalom (who were also rapists!) were killed. His reign was characterized by violence and bloodshed.  Here’s Lamb, again:

The consequences for sexual violence are severe indeed, but God’s mercy toward repentant sinners is even greater. When we talk about sexual violence and help victims, we need to remember that God’s grace is far more powerful that human sin—as egregious and damaging as it can be. Scripture teaches that when humans behave badly, God behaves graciously. He not only forgives repentant sinners, but also gives aid, strength, and healing to victims of abuse.

This is my favorite sentence of Lamb’s conclusion.  He wrote, “Jesus, the offspring of both victims and perpetrators of sexual abuse, came to redeem not only their lives but ours as well.”

To understand that, we have to be as honest about sexual violence and sin as the Bible is.

March 20, 2016
What Christians Just Don’t Get About LGBT Folks
Next Post

March 22, 2016 After the Brussels attack, avoid making this critical mistake
Recent Comments
0 | Leave a Comment
Browse Our Archives
get the latest from
Politics Red
Sign up for our newsletter
POPULAR AT PATHEOS Politics Red
1