Katie Couric admitted to deceptively editing anti-gun film: she should be fired

Katie Couric admitted to deceptively editing anti-gun film: she should be fired May 26, 2016 Nancy French

Even though veteran journalist Katie Couric has been publicly exposed for deceptively editing footage of her interview with a pro-gun group to make them appear unintelligent, she remains unrepentant and proud of her work. Perhaps it’s time she lose her job from Yahoo! News.

The Washington Free Beacon brought Couric’s deception to light this week when it released raw audio from an interview she did with members of the gun rights group Virginia Citizens Defense League. The interview was to be used in the documentary Under the Gun, executive produced by Couric and written and produced by director Stephanie Soechtig, an avid anti-gun activist. However, solid answers to Couric’s question were deliberately left out of the final cut of the film.

Couric asked, “If there are no background checks for gun purchasers, how do you prevent felons or terrorists from purchasing a gun?”

In the film, members of the VCDL appear to remain silent, staring at the floor for a full nine seconds, making it seem as if they had no answer. But the raw audio revealed that the group answered her question immediately for a full four minutes, thanks to recording the audio for themselves.

Now exposed by the VCDL, Soechtig has responded with the following statement, which doesn’t deny the charges of deception and only apologizes for hurt feelings:

There are a wide range of views expressed in the film. My intention was to provide a pause for the viewer to have a moment to consider this important question before presenting the facts on Americans’ opinions on background checks. I never intended to make anyone look bad and I apologize if anyone felt that way.

As for Couric, she stands behind her film and the director’s statement:

“I support Stephanie’s statement and am very proud of the film.”

How is this credible journalism, again? Yahoo should seriously be contemplating her termination at this very moment.

And let’s not forget that this is the same news personality that sat down with Planned Parenthood President Cecil Richards, defending her against the “edited” undercover videos by the Center for Medical Progress that exposed the abortion giant for selling fetal body parts. Of course, this is all liberal journalism 101: what’s good for me may not be good for you.

Dear Yahoo, let me put this in plain English for you. Your premier news personality is “proud” of lying. She “supports” a statement that purports to justify those lies as a form of creative “pause.” This would be a firing offense at any decent opinion journal, much less an organization that purports to objectively report the news. Americans can no longer trust a single news report or a single interview from Couric. They now know that she will unashamedly and proudly deceive them to advance her own ideological agenda.

If Yahoo fails to act, it becomes culpable in Couric’s lie and invalidates itself from ever being taken seriously as a news outlet again.

Would Katie Couric find it acceptable if her words were edited to say something she never said? Surely not! Thankfully Reason did it anyway for a much needed laugh:

May 26, 2016
Dear University Of Tennessee Sex Week, See Ya Later!
Next Post 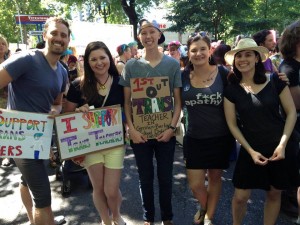 May 26, 2016 Transgender teacher wins $60,000 from district because co-workers called her by the wrong pronoun
Browse Our Archives
get the latest from
Politics Red
Sign up for our newsletter
POPULAR AT PATHEOS Politics Red
1