This is rich. Ann Althouse caught a great moment in the “bottom of the screen television scrawl.” On CNN, Baltimore mayor Stephanie Rawlings was saying Republicans can only win through voter suppression in the 2016 Presidential race.

But just as the words came out of her mouth, the bottom of the screen pointed out that Democrats are the ones who have a penchant for discrimination and voter suppression in ways that  against tea party groups — in ways that actually could’ve cost Mitt Romney the election during his last run: 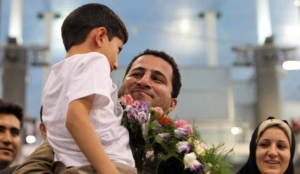 August 7, 2016
UPDATE: Did one of Hillary's emails lead to this man's execution in Iran?
Next Post

August 8, 2016 Kerri Walsh Jennings' comment about babies stark contrast to player who had 2 abortions to preserve her career
Browse Our Archives
get the latest from
Politics Red
Sign up for our newsletter
POPULAR AT PATHEOS Politics Red
1