A white Trump voter leaves a black waitress a $450 tip, an uplifting note, and a changed perspective

I’m a sucker for those “big tip” stories that show up on the internet every few months.  As a former waitress (at the Huddle House, followed by a more upscale restaurant in Nashville), I know what it’s like to work on your feet all day for that added 20%.

On the day that Donald Trump took officer, a black waitress named Rosalynd Harris was working at “Busboys and Poets,”  a Washington restaurant created “where racial and cultural connections are consciously uplifted…a place to take a deliberate pause and feed your mind, body and soul…a space for art, culture and politics to intentionally collide…”  The restaurant exists to “inspire social change and begin to transform our community and the world.”

So… not the Huddle House.

When three white Trump supporters — including a dentist named Jason White — and came in, they noticed the African art on the walls and instinctively took off their red “Make America Great Again” hats.  Though they felt they stuck out at the restaurant, they were seated in Rosalynd’s section and chatted amiably. They told her they were from Texas, complimented her smile — White is a dentist — and had a good meal that cost around $72.

When White paid the bill, he added a $450 tip — a nod to the 45th President he’d come to support.  Though White is a devout Christian and doesn’t agree with everything Trump says, he believes that Americans have certain duties regardless of who is sitting in the Oval Office.  Also, he added a note to the bill:

“We may come from different cultures and may disagree on certain issues, but if everyone would share their smile and kindness like your beautiful smile, our country will come together as one people. Not race. Not gender. Just American. God Bless!”

“We have to think about being better Americans, we have to look into ourselves and how we treat one another,” he said. “If everyone did a little something to show respect…we can love one another.”

So what did the waitress think about this gesture?  Well, it was more than symbolism to her.

“You automatically assume if someone supports Trump that they have ideas about you,” she said, “but [the customer was] more embracing than even some of my more liberal friends, and there was a real authenticity in our exchange.”

The windfall also came at a time when Harris could really use it, she said. A professional dancer, she started waitressing about a year-and-a-half ago to make extra money to pay her bills. She needs to move to a new apartment soon and has worried about how she’ll have enough cash to pay any upfront costs. She scheduled herself to work extra shifts to ensure she had enough, and the extra $450 is “a huge weight off my shoulders,” she said.

But she said the men left her with so much more. Their words were a reminder not to make assumptions. And that so many Americans want unity, regardless of their politics, and to not be afraid to connect with someone as human beings, she said.

“This definitely reshaped my perspective. Republican, Democrat, liberal are all subcategories to what we are experiencing,” she said. “It instills a lot of hope.”

In deed.  I guess the “Busboys and Poets” vision of creating a place where “culture and politics intentionally collide” really happened on the day Donald Trump’s was inaugurated.  Later that day, they posted the receipt on Twitter, noting that the Trump supporter demonstrated a “lovely act of kindness.”

We rise by lifting others. A lovely act of kindness pic.twitter.com/S01SV3w8ts 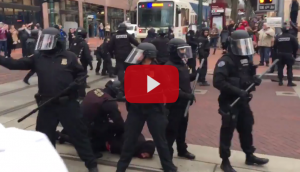 January 26, 2017
Anti-Trump protestors block road until police show up and take care of business
Next Post 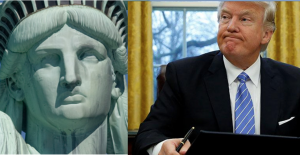 January 29, 2017 David French on NPR: Trump's executive order roll out was flawed but it's actually moderate - the reaction is overblown
Browse Our Archives
Follow Us!