Over the last ten presidential elections, women have voted for the Democratic Presidential candidate over the Republican one by a pretty significant margin. Democrats, who somehow won the rhetorical war about gender, even somehow managed to portray Gov. Mitt Romney as “anti-woman” because he explained that he searched for female Cabinet members.  His staff assembled “binders full of women” from which he hired people.  That was enough to get Democrats all riled up over Romney’s anti-woman sentiment.

Enter Kellyanne Conway, one of the most prominent and influential women in America.  When she got on a couch in an inelegant way, liberals were apoplectic over her lack of propriety.

And then this happened.

The Washington Press Club Foundation held their Annual Congressional Dinner Wednesday night, where media members and lawmakers join together for a night of what is supposed to include comedic speeches and light-hearted fun.

But according to Independent Journal Review’s Benny Johnson, who was in attendance, one Democratic lawmaker took it too far when he made a derogatory remark about White House senior counselor Kellyanne Conway and the “controversy” surrounding the picture of her on the Oval Office couch crouching on her knees.

Here’s how the Democratic party really thinks of powerful women:

Like the rest of America, I’m sick and tired of liberal preening when it comes to issues of gender and sex. But if they’re going to complain, at least they could have the decency of pretending to care about consistency. 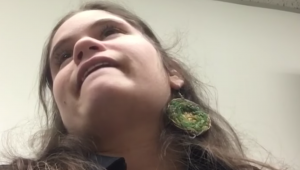 March 2, 2017
College implements a new 'oops!' and 'ouch' rule - student suspended for questioning the "call out" culture
Next Post