‘The Earth Is Filled with Violence Because of Them’: Guns Seen Through the Lens of Genesis

Editor’s Note: This piece is part of a conversation Patheos is hosting on the new film The Armor of Light. Find more perspectives here.

By Dr. Christopher B. Hays

This essay was written for a forum relating to a documentary entitled “The Armor of Light,” which tells the story of a conservative evangelical pastor who comes to embrace gun control. As a professor of biblical studies at a theological seminary, I find hope in Rev. Rob Schenck’s story. It affirms the Gospel’s potential for transformation as much as any religious conversion does. Laying out more clearly the biblical and theological grounds for a solution to our U.S. epidemic of gun violence is now a pressing task for theologians.

One of the oldest and most basic theological claims the Bible makes about the Lord—the God of Abraham, Isaac, and Jacob—is that He is the lord of life and death.[1] This fundamental point resounds through much of the canon, from the cries of the Psalms to the threats and promises of prophets, and from the miracles of Jesus to the final Revelation. In 2 Kgs 5:7, the king of Israel despairs of his own powers, asking: “Am I God, to give death or life?”

Like many Americans, I’ve watched with increasing disbelief, dismay, and even anger, as our country has failed to get a handle on its epidemic of gun violence and the harmful subculture that enables it. In that effort, the work of politicians and public-health researchers is crucial, but there is a need for biblical scholars and theologians, too, since the battle is for hearts and minds—and you can find Web sites arguing that the Prince of Peace would have high-fived you for your purchase of an AR-15.

These pro-gun theological arguments use the Old Testament extensively, and many readers bring a preconceived notion that the “God of the Old Testament” is violent, so they may be predisposed to believe that the Lord warrants gun violence. Is that correct?

Am I God, to give death or life? — the question is rhetorical, and it brings into focus a fundamental problem with the United States’ gun obsession: hubris. Humankind wants—and believes that it needs—a power over life and death that our humanity makes us unworthy of. Paul talks about an analogous denial of God in Romans 1: “since they did not see fit to acknowledge God, God gave them up to a debased mind and to things that should not be done” (Rom 1:28); one of those things is murder (1:29). The theological tradition calls our condition sin; but even a secularist can agree that our human limitations render us unable to wield the power of death justly.

If we’re going to think about guns and the Bible, where better to start than at the beginning, with the book of Genesis? Nowhere in the Bible is God’s lordship over life and death more thoroughly and artfully portrayed. Genesis begins with the creation of “every living thing” (1:28).[2] The serpent in the garden pitches Eve and Adam the fruit of the forbidden tree with the promise that they could “live forever” (3:22).

One of Genesis’s most pervasive references to life is easy to overlook: 33 times in the genealogies (Gen 5, 11), we read: “And X lived Y years…” That phrase captures a central interest of the book—they lived! The chain of life is unbroken. In God’s efforts to shepherd humankind, the preservation of life becomes the central theme of the plot. Eventually the story focuses on the preservation Abraham’s family—if the family line is snuffed out, then the promises to Noah (Gen 9) and Abraham (Gen 12, 15) are broken.

In Genesis, we humans do not make it easy on God to make life flourish; we are a fountain of rebellion and unrest. Adam and Eve pursue life through the wrong means (Gen 3); Cain murders Abel (Gen 4); Lamech avenges himself “seventy-sevenfold” (Gen 4:23-24); the generation of Noah propagates violence (Gen 6). The persecuted of Sodom and Gomorrah send up a great cry to heaven (Gen 18); the brothers of Joseph throw him in a pit and report him dead (Gen 37).

At the end of the book, however, we learn from Joseph that human violence and rebellion do not have the last word: He tells his brothers: “Although you intended to harm me, God intended it for good, in order to keep alive a numerous people, as he is doing today” (Gen 50:20).

Along the way, despite the manifest flaws of humanity, Genesis subtly expresses the hope that humans can resolve conflict without physical violence. There are great tensions among the family of Abraham, but they find ways to resolve them. Examples include the parting of Abraham and Lot after their shepherds’ inability to co-exist (Gen 13); the covenant of separation enacted by Jacob and Laban after their many conflicts (Gen 31); and the meeting of Jacob and his brother Esau without bloodshed (Gen 32), although the latter had threatened to kill the former for stealing his blessing and birthright (27:41). [3]

The family stories of Genesis demonstrate that even within the messiness of human existence, there is hope. They are chaotic and challenging stories from which to extract ethics, but they are not without logic. Indeed, they are arguably the best possible outcome of the theological universe in which they are set. Consider:

People inevitably come into conflict; that’s who we are. But in our conflict, not all solutions are open to us. God is the keeper and shepherd of all. Those in his flock are his, not the property of men, to be slaughtered. Abraham, Lot, Jacob, Laban, and Esau honor this in their actions. In their limited, human ways, they are models. They may not be saints, but they can manage not to kill each other. They master the sin that Cain could not (Gen 4:7).

Their efforts were almost wasted.

The story suggests that it wouldn’t have been enough, had Joseph’s brothers killed him—whether directly or indirectly. Without Joseph’s rise to power in Egypt, and his foresight in preparing for famine, his brothers and their families presumably would have starved. Even the brothers perceive divine judgment in their precarious situation. As Reuben puts it: “now there comes a reckoning for his blood” (42:22). This is the very reckoning that God promised in Gen 9—the use of the same Hebrew verb leaves no doubt. They are guilty, but the punishment does not come. God intended it for good.

If one speaks of God intervening to break the cycle of sin and violence, Christians are prone to think of it as a New Testament phenomenon, in the person of Jesus Christ. But here it is, in the beginning, in the person of Joseph.

Where do we come into this story? How do we live into this story? By buying guns and brandishing them at every threat? By seeking to wield the power of death over our neighbors? Or, rather, by partnering with God in breaking cycles of violence, as Joseph did? And by facing even those who have done us harm without harming them back?

Some will object that it was easy for Joseph, Jacob, and Abraham to show grace to members of their own family—surely within a family it is more necessary to avoid violence. But in the New Testament, all Christians are called children of Abraham by faith (“he is the father of all of us”; Rom 4:16). The ethics are the same, while the clan divisions pass away. This is where evangelical Christians often fail most spectacularly—taken as a demographic, evangelicals are clannish in the extreme. But God intends to preserve life for all, not just one family. God intends for us all, minimally, to coexist without violence.

Finally, the universality of sin means that the binary opposition of “good guys” and “bad guys” is a fiction. Sin means that the “good guy with the gun” is always susceptible to becoming the “bad guy with a gun,” as we see over and over again. The hubris of wielding the power of death makes us more susceptible to sin, and then guns make our sin that much more harmful. Jesus says, “if your right hand causes you to sin, cut it off and throw it away; it is better for you to lose one of your members than for your whole body to go into hell” (Matt 5:30)—if he would say this of a hand, how much more does it apply to mere guns? They have to go; they have no place in the Christian family. Sin is lurking at the door; but we must master it.

[4] It’s remarkable that this verse is used to justify the use of deadly force; it compares the killing of a human being to killing God! Far from reflecting any ideal, it views such an outcome as a profound tragedy to be avoided.

Christopher B. Hays is the D. Wilson Moore Associate Professor of Ancient Near Eastern Studies at Fuller Theological Seminary. He has previously held teaching and research positions at Emory University, Princeton Theological Seminary, and the University of Notre Dame Tantur Ecumenical Institute in Jerusalem. He has participated in archaeological research in Israel and conducts study trips there. 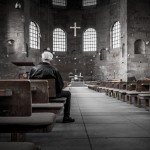 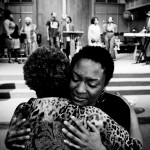