From confronting evil to belief in God

From confronting evil to belief in God May 15, 2009 Gene Veith

Roger L. Simon, who is Jewish, tells about how he changed from not believing in God to believing in Him in the course of a confrontation with the president of Iran:

I heard screaming sirens followed by shrieking motor cycles when Ahmadinejad himself entered, accompanied by a phalanx of Iranian secret service, all of whom were larger than he. He was indeed a small man, almost diminutive, and marched straight across the lobby in what seemed at the time like a goose step a few feet away from me, staring directly at me while waving and smiling in my direction.

I did not wave or smile back.

I couldn’t. Indeed, I was frozen. I felt suddenly breathless and nauseated, as if I had been kicked brutally in the stomach. I was also dizzy. I wanted to throw up. But no one had touched me and I hadn’t eaten anything for hours.

It was then, I think, that I found, or noticed, or understood, religion personally for a moment.

For most of my life I had rationalized the existence of bad people – or, more specifically, placed them in therapeutic categories. They were aberrant personalities, psychologically disturbed. It wasn’t that I thought better economic conditions or psychoanalysis or medication or whatever could fix everyone. I was long over that. Some people… serial killers, etc…. had to be locked away forever. They would never get better. But they were simply insane. That’s what they were.

Still… I had seen whacked murderers like Charles Manson, late OJ Simpson, up close and this wasn’t the same. This was more than the mental illness model. Far more. For one thing, I had never before had this intense physical sensation when confronted with another human being. Nor had I wanted to vomit. Not for Manson. Not for anyone. This was different.

It was almost unreal, like being in a movie, in a certain way. I know comparisons to Hitler are invidious, in fact usually absurd, but I was feeling the way I imagined I would have felt opposite Hitler.

I was in the presence of pure Evil.

Now that’s a big word and I have spent my life reluctant to use it. But there it was – popping up out of my mouth within seconds of the Iranian leaders disappearance into the hotel elevator. For once, “psychopath” or “sociopath” did not feel remotely appropriate. Only the E-word would suffice.

The next day Ahmadinejad spewed his Holocaust denying bile to the United Nations plenum – ratifying that evil, if not the repellent Durban I – and some, but not nearly enough, of the state representative’s walked off. Enough would have been all of them.

A short time after that, I saw the Iranian again, up close and personal, although I really didn’t want to do it.

In fact I would have preferred to be almost anywhere else but in that room with him at a press conference as he twisted the logic of the journalist’s questions, turning the word “democracy” into “tyranny,” “freedom” into “oppression” and “tolerance” into “racism.”

I didn’t say anything. I didn’t know how to address or question evil, although by then I knew to my core I was facing it. . . .

So how does this make me religious?

Well, just as there are no atheists in foxholes, maybe no one is an atheist when confronted with what he finally acknowledges to be Evil. If there is Evil, there must be Good, no? And some force governing this game, something that, well, looks over it.

May 14, 2009
Another kind of God-talk in the public square
Next Post

May 15, 2009 Michelangelo as secret Lutheran?
Recent Comments
24 Comments | Leave a Comment
Browse Our Archives
get the latest from
Cranach
Sign up for our newsletter
POPULAR AT PATHEOS Evangelical
1 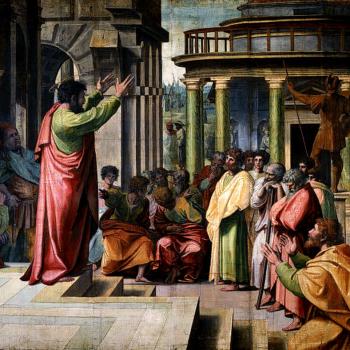 An Aging World and the Remaking of the...
I have written a great deal through the years about the Global...
view all Evangelical blogs
What Are Your Thoughts?leave a comment
Copyright 2008-2020, Patheos. All rights reserved.