Jay Leno was just on too early

Jay Leno Cancelled, Conan Comtemplating Split | TheHDRoom.  NBC’s plan to save money on scripted shows by moving Leno to prime-time didn’t work.  Now the network wants to move him back to late night, to the consternation of Conan O’Brien–who, as Leno’s replacement on the  Tonight Show,is also having ratings woes–and Jimmy Falloon, who is on even later.

This doesn’t surprise me.  Leno is very funny, but you have to be up late past your bedtime his humor to have its full effect.  The same holds true for the other late night comedians, some of whom need to be on really, really  late before they can even seem mildly amusing.  When you are well-rested and in your right mind, they tend to  fall flat.

What do you think should happen?  Conan is considering stomping off and going to FOX.   If they were all on at the same time, would you rather watch Leno, O’Brien, or Letterman? 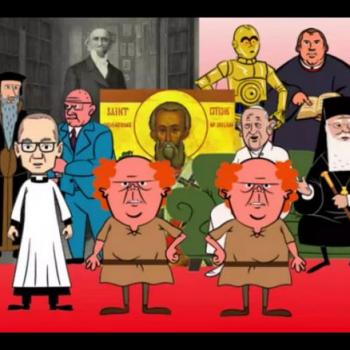 Hymns of Hope and Comfort: Built on the...
During this time of fear and uncertainty in the COVID-19 wilderness, I’ve...
view all Evangelical blogs
What Are Your Thoughts?leave a comment
Copyright 2008-2020, Patheos. All rights reserved.