T. S. Eliot was one of the most important founders of the modernist movement in literature, a cutting-edge poet of the first order.  And yet he was converted to Christianity.  He also began calling himself a conservative and a classicist.  But he still wrote cutting-edge poems of the first order.  Among them is “Ash Wednesday,” which he wrote not too long after his baptism.  Here he writes about the Word of God, Christ as the still point of the whirling world, of the Church which he had newly joined (he was an Anglican) and which he personifies as the veiled sister.  An excerpt:

If the lost word is lost, if the spent word is spent
If the unheard, unspoken
Word is unspoken, unheard;
Still is the unspoken word, the Word unheard,
The Word without a word, the Word within
The world and for the world;
And the light shone in darkness and
Against the Word the unstilled world still whirled

About the centre of the silent Word.

O my people, what have I done unto thee.

Where shall the word be found, where will the word
Resound? Not here, there is not enough silence
Not on the sea or on the islands, not
On the mainland, in the desert or the rain land,
For those who walk in darkness
Both in the day time and in the night time
The right time and the right place are not here
No place of grace for those who avoid the face
No time to rejoice for those who walk among noise and deny the voice

Will the veiled sister pray for
Those who walk in darkness, who chose thee and oppose thee,
Those who are torn on the horn between season and season, time and time, between
Hour and hour, word and word, power and power, those who wait
In darkness? Will the veiled sister pray
For children at the gate
Who will not go away and cannot pray:
Pray for those who chose and oppose

O my people, what have I done unto thee.

Will the veiled sister between the slender
Yew trees pray for those who offend her
And are terrified and cannot surrender
And affirm before the world and deny between the rocks
In the last desert before the last blue rocks
The desert in the garden the garden in the desert
Of drouth, spitting from the mouth the withered apple-seed.

And let my cry come unto Thee.

February 17, 2010
The emergent church meets the "Spirituality of the Cross"
Next Post 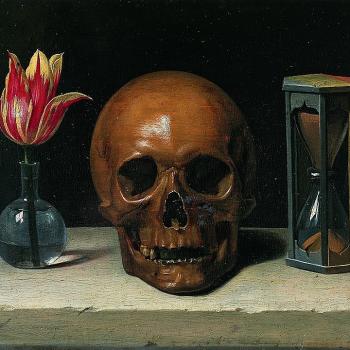 Evangelical
To Dust You Shall Return
Cranach
TRENDING AT PATHEOS Evangelical