A letter from the late poet W. H. Auden to his pastor, on the occasion of the church–St. Mark’s Episcopal in New York City–adopting a more modern liturgy:

Have you gone stark raving mad? Aside from its introduction of a lesson and psalm from the O.T., which seems to me admirable since few people go any more to Mattins or Evensong, the new ‘liturgy’ is appalling.

Our Church has had the singular good-fortune of having its Prayer-Book composed and its Bible translated at exactly the right time, i.e., late enough for the language to be intelligible to any English-speaking person in this century (any child of six can be told what ‘the quick and the dead’ means) and early enough, i.e., when people still had an instinctive feeling for the formal and the ceremonious which is essential in liturgical language.

This feeling has been, alas, as we all know, almost totally lost. (To identify the ceremonious with ‘the undemocratic’ is sheer contemporary cant.) The poor Roman Catholics, obliged to start from scratch, have produced an English Mass which is a cacophonous monstrosity (the German version is quite good, but German has a certain natural sonority): But why should we imitate them?

I implore you by the bowels of Christ to stick to Cranmer and King James. Preaching, of course, is another matter: there the language must be contemporary. But one of the great functions of the liturgy is to keep us in touch with the past and the dead.

And what, by the way, has happened to the altar cloths? If they have been sold to give money to the poor, I will gladly accept their disappearance: I will not accept it on any liturgical or doctrinal grounds.

Auden is not referring to “contemporary worship,” of course, just the folky trendiness of modern-language liturgies (think Catholic folk masses as opposed to the Tridentine Mass; Lutheran Worship, as opposed to The Lutheran Hymnal, though not nearly so much).  I believe this letter dates from 1968 and probably refers to some of the trial orders of worship that would lead up to the 1979 version of the Book of Common Prayer.  Still, what we now know as contemporary Christian worship arguably had its theological beginnings in the worship innovations of these liturgical churches, which adopted the principles of being community-centered, using modern music, and being culturally relevant.

Auden was arguably the greatest poet in English in the generation after T. S. Eliot.  Whereas Eliot, born in St. Louis, gave up his American citizenship to become a naturalized British subject, Auden did the reverse, giving up his British citizenship to become an American.  Both had been known for cutting edged bohemian radicalism and then converted to Christianity.  I suppose I should also say that Auden, who was open about it, was gay, though I haven’t run across anything where he justifies his sexual orientation.

There is much good material here:  his rejection of the notion that liturgical worship is undemocratic; his defense of archaic language; his point that the liturgy is supposed to connect us with the past and with the dead, his exhortation “by the bowels of Christ.” 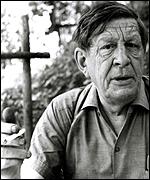