Martin Luther’s influence goes far beyond the theology of the Lutheran Church.  His putting the Gospel and the Word of God at the center was the catalyst for all Protestantism.  But even his theological opponents have accepted his ideas like worship in the vernacular, congregational singing, and vernacular translations of the Bible.  Then there are his cultural contributions:  universal education, standardizing the German language, vocation.  But there are also things he is credited for that are questionable or uncertain, like inventing the Christmas tree.  And there are things that that he is credited for that are just wrong, like writing “Away in the Manger” and being the source of German anti-semitism.  Being a master of language, he is supremely quotable on all kinds of subjects.  But he is also cited as the source of things that he never really said (such as the “Wise Turk” quote).  I have recently learned that Luther is considered one of the inventors of bowling!

Read this and this and this.  According to some of those articles, Luther standardized the rules, including establishing the number of pins as nine.  They say that the Bowling Hall of Fame has a diorama of Luther that says he “once preached a sermon that proclaimed Christians ‘strive for perfection in life. But when we roll a gutterball, all is not lost.’”

I was alerted to this by the reader known by his nom de plume of Carl Vehse, whom you know as a fiery commenter whom some of you want me to censor, but whom I know as a former member of my congregation, a Ph.D. in nuclear chemistry, and an indefatigable researcher.  He was the one who debunked the “Wise Turk” quote, and he was suspicious of this one.  “Gutterball”?  But bowling back then was played on lawns, not in a bowling alley.

So, after much digging, he got in touch with the Bowling Hall of Fame, which found this in a brochure from the 1990s:  “He [Luther] once preached a sermon which, if put into bowling vernacular, proclaimed we all strive for perfection in life. But if we roll a gutterball, all is not lost.”

“If put into bowling vernacular”!  So it’s not really a quotation, though that’s how it has been reported.

Can anyone identify the original quotation that was augmented with bowling lingo?

And can anyone verify that Luther had a role in the sport of bowling?

January 31, 2014 Your one-stop Superbowl blog
Recent Comments
0 | Leave a Comment
Browse Our Archives
get the latest from
Cranach
Sign up for our newsletter
POPULAR AT PATHEOS Evangelical
1 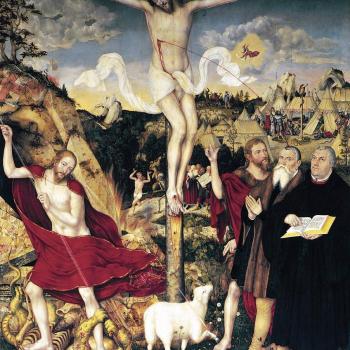