Miranda Threlfall-Holmes discusses one of my favorite poems, The Agony by George Herbert.  It is about how we try to measure everything, neglecting what cannot be measured; namely, sin and love.  But these can be known in their depths as they come together in the Cross of Jesus Christ.  The poem concludes with these lines on the Sacrament:

Love is that liquor sweet and most divine

Which my God feels as blood; but I, as wine.

From How can we measure the immeasurable? | Miranda Threlfall-Holmes | Comment is free | theguardian.com:

In typical 17th-century metaphysical style, Herbert’s poem The Agony begins with a sweeping and grand survey of the state of human knowledge:

Fathom’d the depths of seas, of states, and kings

Walk’d with a staff to heav’n, and traced fountains.

The effect is to paint an impressive still life, full of globes and maps and sextants, crowns and armies, books and telescopes. Geography, mathematics, astronomy, political science: the educated elite of the 17th century were justly proud of their state of knowledge, and of the speed at which it was growing. This was a time when the known world was rapidly expanding into the New World, great advances were being made in navigation and associated sciences, and the study of political theory was in ferment. The sense of pride and awe and intellectual excitement of all this is palpable.

It is still remarkably fresh today, as science strains towards a Grand Unifying Theory of Everything. A modern poet might similarly summarise the state of contemporary science and humanities: we have measured virtually everything there is to be measured. . . .

But the question of what can’t be measured remains. How are we to value things for which science is yet to devise a metric? How are we to assess things that it is theoretically impossible to measure? . . . .

Herbert suggests two “vast spacious things” which few experts attempt to “sound” (get to the bottom of, as with measuring the depths of the sea): sin, and love. . . .

Here the action cuts from a carefully arranged academic still life, to an equally familiar but graphically contrasting crucifixion scene. It is a grisly one. From standing in a museum, we are suddenly confronted with:

A man so wrung with pains that all his hair

His skin, his garments bloody be.

Just as we are staring in shock at the abrupt change of focus, the poem drags us back to the academic question. How can one plumb the depths of sin? The question could easily be one of angels dancing on the head of a pin, but Herbert answers it not with theology, but with another arresting image:

Sin is that press and vice, which forceth pain

To hunt his cruel food through ev’ry vein.

Then the scene shifts again – as in a dream, or nightmare, we are no longer looking at the scene from the outside, but are suddenly a participant in it. To measure love, we are told, to “assay” (again, a carefully chosen scientific term) the blood that flows from the dead man’s side. As we are recoiling in horror from this thought, it becomes even more graphic – we are asked how it tastes. In the final couplet, Herbert draws us back into the present by making the link with the wine at communion explicit:

Love is that liquor sweet and most divine

Which my God feels as blood; but I, as wine.

How can we measure the immeasurable? We can’t. The stock in trade questions of academic theology – what is sin, what is love, what did Jesus’ death accomplish – are not answered. We are simply presented with the image of Christ on the cross. And in doing so, Herbert is of course at his most profoundly theological. The poem’s construction itself communicates the fundamental Christian doctrine that God’s answer to all our questions is not words or theories, but to become incarnate as a human being and simply say: I am. Taste and see.

April 8, 2014
Does the internet degrade our ability to read?
Next Post

April 9, 2014 More turmoil in Ukraine
Recent Comments
0 | Leave a Comment
"Please tell me this is a "tongue in cheek" article?"
David Hill Church Growth by Kicking Out Old ..."
"Okay, didn't realize he was talking about the Bible. He didn't say so. Not being ..."
Illithid Impeachment & the Renaissance
"Good one! That may be the real reason everyone keeps using the "post-" prefix. Because ..."
GEVeith My New Book on Secularism
"I think it's a timely book as there's growing evidence we're approaching peak secularism in ..."
SAL My New Book on Secularism
Browse Our Archives
Follow Us! 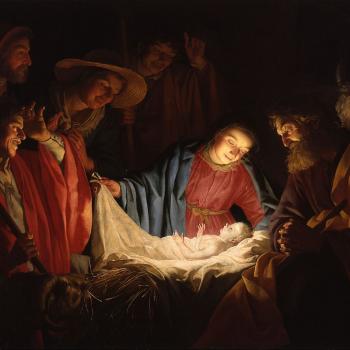