After the jump, a brief discussion of gratitude as a Christian concept.

From, of all places, Gratitude – Wikipedia, the free encyclopedia:

Gratitude has been said to mold and shape the entire Christian life. Martin Luther referred to gratitude as “The basic Christian attitude” and today it is still referred to as “the heart of the gospel.”[12] As each Christian believes they were created by a personal God, Christians are strongly encouraged to praise and give gratitude to their creator. In Christian gratitude, God is seen as the selfless giver of all good things and because of this, there is a deep sense of gratefulness which enables Christians to share a common bond, shaping all aspects of a follower’s life. Gratitude in Christianity is an acknowledgment of God’s generosity that inspires Christians to shape their own thoughts and actions around such ideals.[1] Instead of simply a sentimental feeling, Christian gratitude is regarded as a virtue that shapes not only emotions and thoughts but also actions and deeds.[12] Jonathan Edwards writes in his A Treatise Concerning Religious Affections that gratitude and thankfulness toward God are among the signs of true religion. Because of this interpretation, modern measures of religious spirituality include assessments of thankfulness and gratitude towards God. Allport (1950) suggested that mature religious intentions come from feelings of profound gratitude and Edwards (1746/1959) claimed that the “affection” of gratitude is one of the most accurate ways of finding the presence of God in a person’s life. In a study done by Samuels and Lester (1985) it was contended that in a small sample of Catholic nuns and priests, out of 50 emotions, love and gratitude were the most experienced emotion towards God.[1]

In the Orthodox, Catholic and Anglican Churches, the most important rite is called the Eucharist; the name derives from the Greek word eucharistia for thanksgiving.

November 26, 2015
The psychology (and benefits) of gratitude
Next Post

November 27, 2015 Most illegal immigrants are shielded from deportation
Recent Comments
0 | Leave a Comment
"There is no such thing as a slave or a master. There are people who ..."
BernankeIsGlutenFree The Mindset that Produced Slavery
"The alternative to everyone else being wrong is that you're just a weird - o ..."
SAL Something Americans Can Agree On: Hating ..."
"A frames are common in Alabama Lutheran Churches too. Typically if a Lutheran Church is ..."
SAL Something Americans Can Agree On: Hating ..."
"Reminds me of the Pentagon (except a bit less cramped)."
SAL Something Americans Can Agree On: Hating ..."
Browse Our Archives
get the latest from
Cranach
Sign up for our newsletter
POPULAR AT PATHEOS Evangelical
1 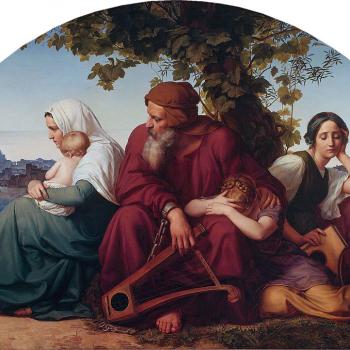