Exemptions for corporations, but not religious groups

The federal government insists that the Little Sisters of the Poor and other religious groups enable their insurance companies to provide contraceptives for their employees.   There is to be no religious exemption, and yet big corporations like Pepsi, Visa, Exxon, and Chevron are exempt from the requirement.  This is because their existing plans have been grandfathered in under Obamacare.  In fact, as many as a third of Americans are in plans that are exempt from the mandate.  So in what sense is providing free contraception such a compelling government interest that it overrides religious liberty?

This point came out in the Supreme Court arguments in Zubik v. Burwell, involving not only the Little Sisters of the Poor but also over 30 other religious non-profits that have joined the case.

From  Pepsi, Visa, and Chevron are Exempt From HHS Mandate, But Little Sisters of the Poor are Not | LifeNews.com:

The Obama administration has been unrelenting in its fight to force a group of Catholic nuns to violate their beliefs and pay for abortion-causing drugs and contraception, arguing that they are essential health care services.

On Wednesday, the U.S. Supreme Court heard an appeal from the Little Sisters of the Poor and 37 other religious groups to stop the Obama administration from forcing them to comply with Obamacare’s abortion mandate. The mandate compels religious groups to pay for birth control, drugs that may cause abortions and sterilization. Without relief, the Little Sisters would face millions of dollars in IRS fines.

While arguing publicly that religious groups should be forced to comply with the HHS Mandate, the Obama administration quietly exempted several major companies from those same rules. Lawyers for the religious groups used this point to argue against the federal government’s overarching mandate on Wednesday.

The Catholic News Agency reports more about the situation:

Meanwhile, some other health plans have been “grandfathered” in and are not subject to the mandate. These include plans offered by ExxonMobil, Chevron, Visa Inc. and PepsiCo.

Furthermore, the U.S. Military includes a family insurance plan that does not offer the mandated services.

And, according to the website, one in three Americans do not have a health plan that satisfies the mandate. The Little Sisters say that since so many employers are offered exemptions under various justifications, there is no reason that they should not receive a religious exemption as well.

While a narrow religious exemption to the mandate is offered to houses of worship and their affiliates, many faith-based charities and non-profits – including the Little Sisters – do not qualify due to a stipulation in tax law that was used to determine religious exemptions.

Instead, the administration has offered what it calls an “accommodation” whereby religious non-profits such as the Little Sisters can notify the government of their moral objections, and government in turn will order the issuer of their health plan to provide the coverage.

However, the Little Sisters argue that this still violates their religious beliefs because they would ultimately be facilitating access to services they believe are immoral. Failure to comply with the mandate would mean fines estimated at $2.5 million per year – 40 percent of what the sisters beg for annually to run their ministry.

Source: Pepsi, Visa, and Chevron are Exempt From HHS Mandate, But Little Sisters of the Poor are Not | LifeNews.com 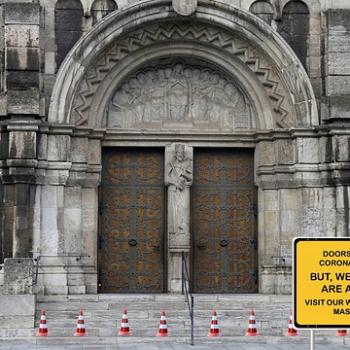