Some former students are putting on Waiting for Godot, Samuel Beckett’s absurdist comedy, and asked me to write a post for the troupe’s blog that would help people understand what the heck is going on.  So I offered some worldview analysis of Beckett’s absurdist existentialism and threw in some literary analysis, as is my wont.  See the post, excerpted and linked after the jump.

From Gene Veith, What’s the Point?: A History of Waiting for Godot – Geronimo Production Company:

Waiting for Godot, by Samuel Beckett, is a play about two men waiting in a field for someone who never shows up. In the course of the play, they carry on some bizarre conversations; another even odder couple shows up, with more antic talk; and (spoiler alert) nothing really happens.

Yet, the play is strangely interesting and involving. But what does it mean?

Beckett’s plays, for which he won a Nobel Prize in 1969, are examples of the Theatre of the Absurd. An Irishman who lived in Paris, Beckett was part of a circle ofavant garde writers, artists, and philosophers who were experimenting with the worldview of existentialism.

To this post-World War II generation, life had no meaning. To be sure, scientists pointed to the regularly operating orderly laws of nature, but this order—grounded in random processes with no real purpose or transcendent meaning (God being out of the picture)—is absurd. The order that they came upon in life was like the meaningless repetitions of a madman.

Existentialists believed that if you recognize the absurdity—rather than blindly following the social conventions, pretending that they mean something, as most people do—you can create your own personal meaning.

The absurdists deserve some credit. They face up to the consequences of there not being, in their minds, a God. Unlike the message in John Lennon’s song, “Imagine,” the non-existence of God would not open up a new age of progress and love. If there is no God, existentialists said, nothing makes any sense, and the Beatles’ notions—however pleasant to contemplate—are absurdities.

The world of Waiting for Godot is absurd to the point of comedy. The Greeks and the Romans believed that the purpose of comedy is to ridicule vice, presupposing an objective moral order. The comedy of Dante and Shakespeare was a progression from pain and discord to reconciliation and joy, the happy ending a foretaste of the Christian Heaven. But modernist comedy, such as Beckett’s, is all about the bitter laughter of excruciating irony, the mockery and sarcasm that often accompany despair.

In the play, which Beckett wrote in 1952 and called a “tragicomedy,” Estragon and Vladimir are waiting for someone named Godot. A boy arrives, telling them that Godot won’t be able to come that day, but will see them tomorrow. Act II shows the next day, and still no Godot, though the boy comes with the same message. In the meantime, Pozzo shows up, with his slave Lucky on a chain. In the first act, Pozzo casually abuses Lucky. In the second act, Pozzo has become blind and depends on Lucky for everything. Thus we see a glimpse of the absurdity of the human condition, as those in power lord it over others, even as they become dependent on their victims.

And yet. . .their waiting for Godot gives their lives a certain meaning after all. They don’t give up on him. They keep their word to him. Their lives are ordered around this expectation. 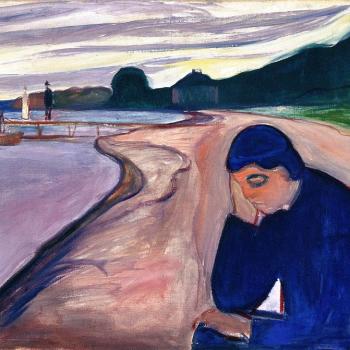 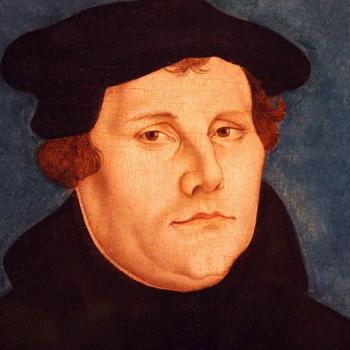