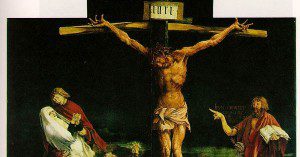 Hispanic martyrs put before the firing squads by socialist dictators would call out as their last words “Viva el Cristo rey!” Long live Christ the King! Or, Christ the King lives!  That’s a good phrase to keep in mind.

Yesterday was the last Sunday of the Church Year, also known, among other names, as Christ the King Sunday.  As a conclusion to our recent series of posts on Two Kingdom theology, we need to remember who is the King of both Kingdoms.

After the jump, a bulletin note on Christ’s kingship from Pilgrim Lutheran Church here in Australia.

On this Last Sunday of the Church Year, the Day of Fulfillment, the focus of our readings is “Christ the King.” In Jeremiah 23 God denounced the kings of Judah as “shepherds” who had scattered God’s sheep.  But God also promised to “raise up for David a righteous Branch,” who “shall reign as king and deal wisely.”

In Luke 23 we see how this King would be revealed to the world:  dying on the cross for the sins of the world.  How hidden from the world is the wisdom of God!  It is seen only by faith.  The hostile religious leaders sneered and scoffed:  “A Messiah (the long-promised King) who can’t save himself!”  The pagan soldiers mockingly challenged him to save himself.  Pontius Pilate wrote a contemptuous yet official (and profoundly true!) superscription, “This is the King of the Jews.”  One of the criminals derisively called for proof of his messiahship.  But the other thief, admitting his guilt, looked to the tortured, dying Jesus and by faith saw Him for who He was:  the King who could save him.  And Jesus promised that he would be with Him in paradise today.  Jesus is the the merciful King who forgives even those killing Him and grants eternal life to a repentant sinner.

Still Christ our King comes among us, bringing the reign of God into our ordinary lives; not in dazzling spectacle but in the ordinary things He has commanded and in which He promised to be present to forgive, save, and give life:  water, word, bread, and wine.

One day, at Jesus’ second appearing, the veil will be lifted and Christ the King’s reign will no longer be hidden to human eyes, and every knee will bow and every tongue confess that Jesus Christ is Lord (Phil 2:10-11).  But for the time being the same Lord Jesus Christ brings the reign of God to us in humble ways, and looking to Christ Crucified we can joyfully say:  “This is my King.”

Helen Bond's The First Biography of Jesus-- Part...
BEN: One of the questions Chapter 3 raises for me at least,...