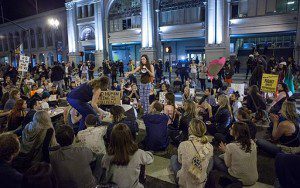 The Democrats and the Greenies missed the deadline to request a recount in Pennsylvania.  Though Jill Stein had the money, the backers, and the media attention, this bit of incompetence–requests had to be filed by November 21–pretty much dooms this attempt to stop Donald Trump post-election.

Though Stein has filed suit against the deadline, the results have to be overturned in all of the states she wants to contest (Wisconsin, where the recount is going forward, though without the hand-counting Stein demands; Michigan; Ohio; and Pennsylvania) before Trump could be denied the White House.

Though there is no chance of stopping him, Democrats are working hard to delegitimize the election, something they were indignant about when they thought Trump would do it.

The silliest argument so far:  A constitutional law expert argues that the Electoral College should always vote for the candidate with the largest popular vote.  (So why do we have an Electoral College?)

After the jump, comments on these efforts from the New Yorker, no less.

From Amy Davidson, The Recount Road to Nowhere – The New Yorker:

A candidate needs two hundred and seventy Electoral College votes to win the Presidency. Trump has three hundred and six, and Clinton has two hundred and thirty-two. This includes sixteen for Trump from Michigan, where his victory, by ten thousand votes, was certified this afternoon. Wisconsin has ten electoral votes, and he is ahead by about thirty thousand; Pennsylvania has twenty, and the lead is seventy thousand. A recount would have to reverse the results in all three states to get Clinton to two hundred and seventy. And, as fivethirtyeight.com noted, this has never happened in cases where the margins are as large as those in Wisconsin or Pennsylvania; even Michigan would be at the edge of past experience. (It is worth noting that Jill Stein won enough votes in Michigan and Wisconsin to account for Clinton’s losses there.)

Stein’s Wisconsin application lists a number of reasons for a recount, most of which are paraphrases of a single thought: the Russians might, just might, have fixed the election—after all, they hacked John Podesta’s e-mail. Added to that is the general observation that electronic voting systems are, in any state, theoretically hackable. That amounts to saying that no one should really trust any results. The only example of observable irregularities that Stein cites is an uptick in absentee voting, something that may have many causes. Attached to her submission is an affidavit from a computer expert, J. Alex Halderman, who has long warned against electronic voting systems. But, apart from explaining why a paper record is a good idea, he doesn’t really offer any evidence, apart from press reports that the Russians have hacked other things and a general sense that they are up to no good. (There have also been reports pointing to a weaker performance for Clinton in counties with paperless balloting; however, as both fivethirtyeight.com and the Upshot have pointed out, any difference disappears when one controls for demographics.) And Halderman includes this line: “One would expect a skilled attacker’s work to leave no visible signs, other than a surprising electoral outcome in which results in several close states differed from pre-election polling.”

This is classic conspiracy logic: the absence of evidence is evidence of just how insidious it is. The failure of an event to turn out as expected is presented as evidence of some hidden hand at work, some deliberate interference.

November 29, 2016 Alcohol vs. marijuana
Recent Comments
0 | Leave a Comment
Browse Our Archives
get the latest from
Cranach
Sign up for our newsletter
POPULAR AT PATHEOS Evangelical
1