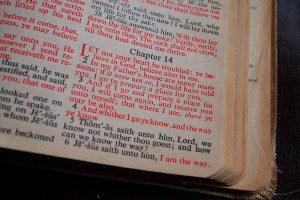 Tony Campolo and some other liberal evangelicals have started a movement they call “Red Letter Christians.”  The term comes from the convention in many editions of the Bible to print the words of Jesus in red.

Red Letter Christians believe that Christianity should be about following the words of Jesus, rather than getting involved in theological disputes, culture war issues, and right wing politics.  Rather, followers of the words of Jesus will be advocates for the poor, promote tolerance, and be “counter-cultural.”

Read the descriptions and the Value Statement from the Red Letter Christian website.  Then consider questions like these:  Do the words of Jesus support liberal politics any more than they support conservative politics?  Do the red letters in the Bible really promote all of these values?  Today, aren’t the conservatives the ones who are “counter-cultural,” with liberals following the cultural trends?  Doesn’t Jesus say some things that go against this social gospel?  What are the theological problems with lifting out the words of Jesus at the expense of the rest of the Bible?

From What is RLC? – Red Letter Christians:

Staying true to the foundation of combining Jesus and justice, Red Letter Christians mobilizes individuals into a movement of believers who live out Jesus’ counter-cultural teachings.

The goal of Red Letter Christians is simple: To take Jesus seriously by endeavoring to live out His radical, counter-cultural teachings as set forth in Scripture, and especially embracing the lifestyle prescribed in the Sermon on the Mount.

By calling ourselves Red Letter Christians, we refer to the fact that in many Bibles the words of Jesus are printed in red. What we are asserting, therefore, is that we have committed ourselves first and foremost to doing what Jesus said. Jesus calls us away from the consumerist values that dominate contemporary America. Instead, he calls us to meet the needs of the poor. He also calls us to be merciful, which has strong implications in terms of war and capital punishment. After all, when Jesus tells us to love our enemies, he probably means we shouldn’t kill them.

The words of Jesus are authoritative and compel us to believe:

December 7, 2016 Vocation in Hacksaw Ridge
Recent Comments
0 | Leave a Comment
Browse Our Archives
get the latest from
Cranach
Sign up for our newsletter
POPULAR AT PATHEOS Evangelical
1