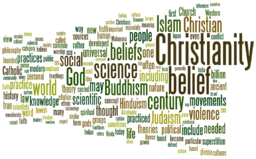 Why was that a religion story?  An important factor in Trump’s win was his support from evangelical voters, even though his lifestyle, moral history, and religious beliefs would not seem to be in accord with those of most Christian conservatives.

What this means, though, is less clear.  Does this mean Christian voters have sold out, or have they become pragmatic in choosing a candidate whom they expect to advance their pro-life and religious liberty agenda instead of insisting on total agreement?  Have evangelicals regained their political clout, or have they lost it, since candidates know they will vote for the Republican no matter what?

What do you think should be on the list?

1) Donald Trump gets strong support from white Christians, especially evangelicals, in an upset presidential election. Many were alarmed by his vilifying Muslims and illegal immigrants and his backing from white supremacists. GOP keeps majorities in Congress.

2) Post-election assaults and vandalism target Muslims and other minorities. Some assailants cite Donald Trump’s victory as validation. Critics denounce the appointment of Stephen Bannon as White House strategist over his ties to white supremacists.

3) Standing Rock Sioux members demonstrate against the Dakota Access Pipeline in North Dakota, which they say will foul water and sacred lands. Clergy and religious activists from around the country join in protests.
4) A busy Pope Francis urges a pastoral approach to the divorced-and-remarried in the apostolic exhortation “Amoris Laetitia.” His Mass at the U.S.-Mexico border supports immigrants; he speaks of Donald Trump’s proposed border wall as not Christian.

5) At least 4,600 migrants are killed in Mediterranean shipwrecks while fleeing conflicts, many with religious dimensions, in Africa and Asia. The ongoing crisis fuels anti-migrant, rightward political shifts in Europe, including Brexit.

6) Terrorists linked to, or inspired by, the Islamic State kill scores and injure hundreds at airports in Istanbul and Brussels, at German sites and in Nice, France, where a man kills 86, many of them Muslim, by driving a truck through a seaside holiday crowd.

7) Despite scholarly attention to “the end of white Christian America” and to growing secularism, the former provide decisive votes for Donald Trump while left-leaning religious “Nones” fail to deliver needed votes for Democrats.

9) Although white evangelicals voted Trump by a 4-1 margin, their leaders split sharply. Many evangelicals of color opposed him. Supporters cited pledges of conservative policies and court picks, opponents his alleged misconduct and racist comments.

10) Omar Mateen, claiming allegiance to the Islamic State, shoots and kills 49, wounds 53 at Pulse, a gay nightclub in Orlando, Fla. Other home-grown terrorists injure dozens at a Minnesota mall, The Ohio State University and NYC-area targets of homemade bombs.

Here are two other lists of top stories of 2016 from a more evangelical perspective:  The Christian Headlines list; the Christian Post list.  They all agree that the election of Donald Trump with evangelical help was the #1 religion story.

December 27, 2016
What you do to your neighbor you do to Christ
Next Post

The Opium of the People
Karl Marx said that religion is the opium of the people, but...
view all Evangelical blogs
What Are Your Thoughts?leave a comment
Copyright 2008-2021, Patheos. All rights reserved.
error: Content is protected !!