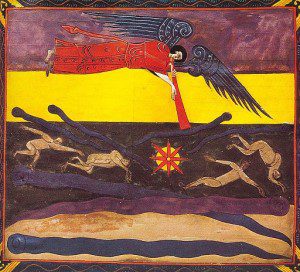 Many End Times preachers are saying that the rise of Donald Trump was prophesied in the Bible as a herald that the last days are upon us.  He’s not the anti-christ.  We know that because the Bible says of the anti-Christ:

“Neither shall he regard the God of his fathers, nor the desire of women, nor regard any god: for he shall magnify himself above all.” (Dan 11:37)

Trump, with his history of womanizing, does regard the desire of women, so we can rest easy about that.  Rather, he is a much more positive sign.  The Scriptures clearly say that Christ will come back after the sounding of “the last trump.”

Never mind that the connection only works in the English language.  And that “trump” as short for “trumpet” only works in the archaic English of the King James Bible.  Or that turning the Bible into a symbolic code, rather than attending to what it literally says, undermines Biblical authority.

Other objections present themselves:  Isn’t the new president the “first Trump” to be in office?  Maybe he will start a dynasty.  Maybe his son Barron, or Barron’s son or grandson, will be the “last Trump.”  Where does “last” enter into the prophecy?  (Can you think of other problems with this interpretation?)

A sample of this End Times prediction after the jump.

I am not suggesting that Donald Trump absolutely *IS* the last trump – but since the LAST TRUMP is one of the most clear and final signs in end times prophecy, can we overlook the possibility that a presidential candidate named Trump is being used as a sign by God?  I have been explaining that evidence points towards everyone knowing the real identity of the politician who has not yet been revealed as the Antichrist in 2016.  (I suspect one politician in particular, but then again I thought this would have been much more clear by now already…)

As for biblical clues on an end times TRUMP:

First, Paul wrote to the Church at Thessalonica, “But I would not have you to be ignorant, brethren, concerning them which are asleep, that ye sorrow not, even as others which have no hope. For if we believe that Jesus died and rose again, even so them also which sleep in Jesus will God bring with him. For this we say unto you by the word of the Lord, that we which are alive and remain unto the coming of the Lord shall not prevent them which are asleep. For the Lord himself shall descend from heaven with a shout, with the voice of the archangel, and with the trump of God: and the dead in Christ shall rise first: Then we which are alive and remain shall be caught up together with them in the clouds, to meet the Lord in the air: and so shall we ever be with the Lord. Wherefore comfort one another with these words” (I Thess. 4:13-18).

Second, Paul wrote to the Church at Corinth, “Behold, I show you a mystery; We shall not all sleep, but we shall all be changed, In a moment, in the twinkling of an eye, at the last trump: for the trumpet shall sound, and the dead shall be raised incorruptible, and we shall be changed. For this corruptible must put on incorruption, and this mortal must put on immortality” (I Cor. 15:51-53).

Illumination from Beatus de Facundus, 1047. “In a moment, in the twinkling of an eye, at the last trump: for the trumpet shall sound, and the dead shall be raised incorruptible, and we shall be changed.”  Credit:  Illustration by Français : Facundus, pour Ferdinand Ier de Castille et Leon et la reine Sancha (Madrid, Biblioteca Nacional) [Public domain], via Wikimedia Commons