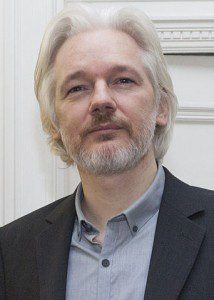 Not long ago, conservatives condemned Wikileaks leaker Julian Assange.  After all, Assange exposed U.S. intelligence operations, possibly endangering the lives of CIA agents.  Donald Trump even said he deserved the death penalty.  But now, after Assange released e-mails embarrassing to Hillary Clinton in support of Trump, some of those same conservatives are all for him.  In fact, they believe him over the CIA!

Conversely, liberals used to praise Assange for revealing the sinister secrets of the militaristic, imperialistic CIA.  Today, now that Assange is supporting Trump and the CIA is saying the Russians were responsible for the e-mail hacks (something Assange denies), the left is vilifying Assange and praising the CIA!

Do you see some inconsistency here?  Michael Gerson does.  After the jump, read his accusations of unprincipled tribalism.  On the other hand, there are civil libertarians on both the right and the left that can make a case for Assange and his exposure of government secrets.

What do you think of Assange now?

Donald Trump’s, Sarah Palin’s and Sean Hannity’s embrace of Julian Assange — who has made a career of illegally obtaining and releasing documents damaging to U.S. interests — is not just a puzzling policy shift. It is the triumph of political tribalism over, well, every other principle or commitment.

All three leaders of right-wing populism once saw the risk. Not long ago, Trump recommended the death penalty for Assange. Now he publicly sides with himagainst U.S. intelligence services. Palin urged the United States to go after Assange “with the same urgency we pursue al-Qaeda.” Now, we have seen her abject pleading: “Julian, I apologize.” Hannity once called for Assange’s “arrest.” Now he provides a sympathetic platform for Assange’s (and thus Vladimir Putin’s) views.

Let’s be clear about what this means. The president-elect of the United States is elevating a man whom the director of national intelligence, James R. Clapper Jr., holds responsible for putting the lives of operatives in direct danger. The 2008 Republican vice presidential nominee is bowing and scraping to the man who materially aided the Taliban. Fox News is now an outlet for the Russian version of events. . . .

This endorsement of politically expedient subversion has happened on the left as well. Those who deny it — those who can only identify destructive tribalism in others — are part of the problem. Assange was a hero in seedier back streets of the left when he seemed to be an opponent of militarism and imperialism. Now: Trump is bad. Assange is helping Trump. So Assange is bad (and the CIA is suddenly the voice of reason).

January 10, 2017
The origin of the Bible's chapters and verses
Next Post

January 10, 2017 Living under the law
Recent Comments
0 | Leave a Comment
Browse Our Archives
get the latest from
Cranach
Sign up for our newsletter
POPULAR AT PATHEOS Evangelical
1

Demons!-- Part Twenty Eight
BEN: One of your most helpful qualifications comes on p. 190—“Though many...
view all Evangelical blogs
What Are Your Thoughts?leave a comment
Copyright 2008-2020, Patheos. All rights reserved.