When Jesse Jackson was pro-life and why he changed 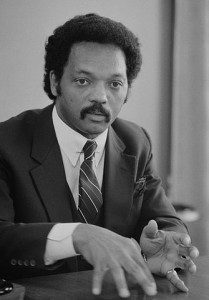 In a tribute to the recently-deceased Nat Hentoff, Carl Trueman describes an encounter on a train between the pro-life leftist and Jesse Jackson.

There is one passage in Speaking Freely (177-78) that offers disturbing insights into modern political culture. Hentoff quotes a certain politician on abortion: “What happens to the soul of a nation that accepts the aborting of the life of a baby without a pang of conscience? What kind of society will we have twenty years hence if life can be taken so casually?” He also quotes the same politician on the right to privacy: “There are those who argue that the right to privacy is of a higher order than the right of life. That was the premise of slavery. You could not protest the existence or treatment of slaves on the plantation because that was private and therefore outside of your right to be concerned.” This politician had himself almost been aborted, and he saw the clear connection between the dehumanizing of a child in the womb and racial oppression, in that both involve a denial of real personhood to a human being.

Later on, this politician decided to run for president and magically changed his mind on abortion. His name? Jesse Jackson.

In his memoir, Hentoff recalls meeting Jackson on a train in 1994. As they journeyed together, Hentoff told Jackson that he frequently quoted his pro-life writings because they were among the most compelling he had read. Jackson, he said, looked troubled. Hentoff then asked the politician whether he had any second thoughts on his change of mind. Jackson looked even more troubled and said, “I’ll get back to you on that.” Hentoff ended the anecdote on this laconic note: “I haven’t heard from him since.”

Of course, Jackson had no arguments for his change. He changed, as Hentoff pointed out, when he wanted to run for president. He is the quintessential politician in an era of mass media and entertainment, where politicians’ views are too often shaped by the perceived direction of the popular wind. That is a tragedy, for opinion polls are more a means of shaping public opinion than of reflecting it. Have you noticed that they continue to be paraded by the media after Brexit and Trump? The media clings so very tightly to its manipulative ideological necromancy. And sadly, politicians today are too often the successors of the Jacksons, not the Hentoffs—selling their consciences to whatever and whoever they think will get them the necessary votes. We need politicians of conviction, not spineless puppets of popular taste.

Al Gore is another prominent Democrat who was pro-life earlier in his career, but turned pro-abortion when he started running on the national stage.  (Does anyone know that story, when he changed his position?)

The Gore family was quite socially conservative.  Remember when his wife Tipper crusaded against the bad influences of rock music?

January 24, 2017 What Trump has done so far
Recent Comments
0 | Leave a Comment
"No, I would disagree with an article like that, that you shared. They are creating ..."
skyorrichegg “Possession” and Psychiatry
"Yea!"
Steve Bauer Newspeak for Abortion, Part 2
"Sounds similar to the "orange prayer" in this country."
reg Prayer Requests
"Disability, dĭs″ə-bĭl′ĭ-tē, noun: the ability to dis others."
Tom Hering Newspeak for Abortion, Part 2
Browse Our Archives
Related posts from Cranach