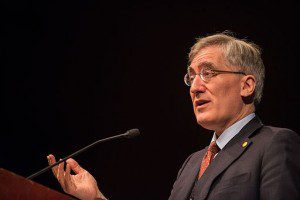 Princeton’s Robert P. George is one of our most prominent conservative thinkers, so it’s interesting to see what he has to say about President Trump’s Supreme Court nominee, Neil Gorsuch.

George, who has worked with Gorsuch, calls him a worthy successor to Justice Scalia. Gorsuch, he says, is an “intellectual superstar.”

Although there were notable exceptions, Donald Trump famously lost the conservative intelligentsia – and went on to do quite well electorally without us. But conservative scholars will, I predict, be virtually unanimous in their praise of the president’s choice of Judge Neil Gorsuch of the U.S. Court of Appeals for the 10th Circuit to succeed Antonin Scalia on the Supreme Court.

I know firsthand why: Gorsuch’s combination of outstanding intellectual and personal qualities places him in the top rank of American jurists. If confirmed, as I expect him easily to be, he will be a good justice and has the potential to be a great one.

Gorsuch and I have worked together on academic projects, most notably when I was the editor of the Princeton University Press book series for which he wrote The Future of Assisted Suicide and Euthanasia – which was praised by bioethicists (including the liberal Daniel Callahan and the conservative John Keown) and academic lawyers – in 2006. The book critically engages the work of scholars across a range of disciplines and representing a spectrum of viewpoints. Gorsuch went the extra mile in ensuring that his treatment of the work of other writers – especially those with whom he disagrees – was sympathetic and impeccably accurate. His fair-mindedness was the thing I found most striking about working with him.

When it comes to fitness for judicial office, the first criteria are usually intellect and education, and here Gorsuch is off the charts. Even people who do not share his political outlook or judicial philosophy, but have read his judicial opinions, recognize him as an intellectual superstar. Anyone who has heard him speak, and especially anyone who has spoken with him, probably has had that impression strongly reinforced. His opinions are marked by analytical depth and precision and remarkably lucid writing.