Do foreigners have constitutional rights? 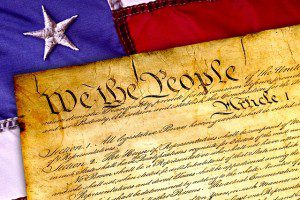 The Supreme Court has taken up a case that will decide whether or not foreigners–even those outside of American soil–have constitutional rights.

On the one hand, how could they?  Non-citizens cannot have the same privileges as citizens.  Foreigners in this country will be treated according to this country’s laws, which means no one will be allowed to mistreat them.  But how can a nation’s laws be applied outside its borders?

On the other hand, doesn’t the Declaration of Independence say that human rights are universal?  They are “inalienable,” not granted by a government but “endowed” by God.

The case, Hernández v. Mesa, has to do with a border control agent shooting a rock-throwing teenager who was on the Mexican side of the border.

From Brendan Kirby, Supremes to Decide if Foreigners Have Constitutional Rights | LifeZette:

The Supreme Court on Tuesday is taking up a case that presents a critical question of law: Can a U.S. law enforcement officer be sued in American courts for the death of a foreigner outside the United States?

For most of American history, the answer to that question has been a clear and emphatic “no.” Courts for two centuries have held that constitutional rights do not apply to foreigners with no voluntary connection to the United States.

That the high court even agreed to take Hernández v. Mesa casts doubt on that long-held understanding of the law, however. . . .

The Supreme Court opened the door to a possible revision with a 2008 ruling that held that prisoners at the Guantanamo Bay, Cuba, detention facility had a right to petition the U.S. courts even though Gitmo is on foreign soil and the detainees were foreigners who never even had been to the United States.

Attorneys for the family of Sergio Hernández quote liberally from that case, Boumediene v. Bush, in their written legal arguments.

February 22, 2017
The fall of the gay right-winger
Next Post

February 23, 2017 Pluto might get promoted back to "planet"
Recent Comments
0 | Leave a Comment
Browse Our Archives
Related posts from Cranach