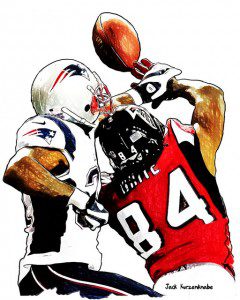 What a great Super Bowl.  New England was down by 25 points late in the third quarter, but came back to force the first overtime in Super Bowl history, whereupon Tom Brady marched his team down the field for a winning touchdown.  This was the biggest comeback ever in the championship series.  Although I was pulling for Atlanta–which played superbly for most of the game–that was a fun game to watch.  If I were more invested in a team (if the Packers were playing and lost in a similar way), I wouldn’t have enjoyed it so much, but unlike many Super Bowl games, this one was a thriller.

The commercials were not all that annoying this year.  My favorites:  The animated yearbook pictures of famous people, though I don’t recall what product they were advertising, which sort of defeats the purpose.  The Melissa McCarthy environmentalist Kia ad was hilarious. But, though I may have missed some, I didn’t see any that were overtly sexual, distasteful, or sensationalistic, as has become common in Super Bowl ads.  There were a few that featured immigrants, a fraught topic at the moment, but none of them seemed overly political or in the Hollywood protest mode.

Even the frequently outrageous Lady Gaga in her halftime show didn’t protest Donald Trump or scandalize the nation, from what I could tell.  She even worked in some patriotic numbers, along with her visual spectacle as filmed by drones.

We even threw a little party, which added to the experience.  So this was for me a rarely satisfying Super Bowl.

What do you have to say about it?

February 3, 2017
Conform to reality or subdue reality?
Next Post

February 6, 2017 Did Trump slander America?
Recent Comments
0 | Leave a Comment
Browse Our Archives
get the latest from
Cranach
Sign up for our newsletter
POPULAR AT PATHEOS Evangelical
1