All mammals can swim, except for two 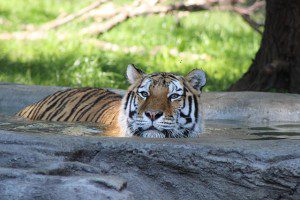 Contrary to what used to be thought, virtually all mammals can swim.  Cats?  Yes, though they hate it.  Camels?  Yes, despite seldom seeing water.  Pigs?  Yes. Elephants?  They are excellent swimmers.  Throw a bat into the water and it will use its little wings like oars.

From what we know now, apparently there are only two mammals–one species and one genus–that can’t instinctively swim.  Guess, and then see what they are–along with a fascinating article on the subject–after the jump.

The only two kinds of mammals that can’t swim are:

Apparently, some apes can be taught to swim.  The author classifies human beings in this category, though humans, once they learn, outdo just about every other terrestrial mammalian species when it comes to swimming.

From Josh Gabbatiss, BBC – Earth – The strange experiments that revealed most mammals can swim:

My girlfriend’s grandparents, Audrey and Hamish, are an inquisitive pair with a keen interest in all things biological. One day, they decided to test a pet theory of Audrey’s.

“I’ve always thought that all mammals can produce milk and that they can swim,” she says, “although not at the same time.”

And so, it came to pass that they found themselves gathered with their daughters around the garden pond clutching their pet guinea pigs. “We had a fishing net in case anybody got in trouble, we put the guinea pig in one side, and it doggy-paddled – or guinea pig paddled – over to the other.”

“That’s the only experimental experience we have,” says Hamish, explaining his view that because most mammals walk on four legs, they should be able to swim instinctively using a “doggy-paddle” style.

But is he right?

Some mammals are clearly natural swimmers. Whales, seals and otters have evolved to move effortlessly through the water. Many terrestrial mammals are capable swimmers too; dogs of course, but also other domestic animals such as sheep and cows. Even cats can swim well, although they don’t enjoy it much.

March 27, 2017 Trump vs. his own supporters?
Recent Comments
0 | Leave a Comment
Browse Our Archives
get the latest updates from
Cranach
and the Patheos
Evangelical
Channel
POPULAR AT PATHEOS Evangelical
1

Legalism vs. Freedom vs. Lawlessness
Cranach
Books by This Author Books by Gene Veith