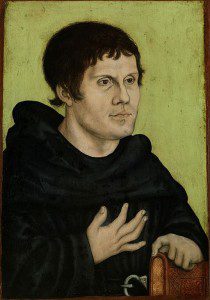 Sarah Hinlicky Wilson, the editor of Lutheran Forum, has been co-teaching a seminar in Wittenberg on Luther to students from all over the world.  She writes in Christian Century about the continuing impact of Luther 500 years after the beginning of the Reformation.

She gives an ELCA perspective, full of ecumenical yearnings for union with Rome, and there will be other points that Missouri Synod Lutherans will disagree with.  Though they find it  worth reading.  For example, notice how she deals with Luther’s anti-Judaism.  I was interested in how she demonstrates that the message of “inclusion”–which is very big in theologically liberal circles–has anti-Judaism problems of its own.

What most struck me was what she had to say about Luther’s cross-cultural appeal, how his theology is being seized upon by Africans, Indonesians, Brazilians, and other people of non-European cultures, who are finding his teachings helpful in dealing with the problems in their churches and societies.  I quote this section after the jump.

From Sarah Hinlicky Wilson, Is the Reformation over? Yes and no. | The Christian Century:

But it’s another thing to see the global face of Lutheranism in person, and in Wittenberg. Every November since 2009 my German colleague Theodor Dieter and I have taught a two-week seminar titled Studying Luther in Wittenberg, which collects the “diaspora” of Lutheranism for a high-octane fellowship of study. . . .

What we encountered was an enthusiastic reception far beyond anything we’d dared to let ourselves dream. We’ve spent time at the seminar table with an Inuit pastor from Greenland who told us how she has to order a whole year’s supply of communion wine because the ice prevents imports ten months of the year. And with a Senegalese pastor who, as an observant Muslim high schooler, read through a Finnish missionary’s entire library before finally being granted access to the Bible—on the conclusion of which reading, he said to himself, “The Qur’an tells how to save yourself; the Bible tells how God saves you.” And with a third-generation Lutheran pastor from Myanmar who was ecstatic to eat sauerkraut and sausages as well as to talk theology all day. Brazilian scholars laboring to translate Luther’s works into Portuguese and a Taiwanese pastor seeing unflattering parallels between 16th-century Christian practice in Europe and 21st-century Taoist practice in China.

Luther has traveled far indeed, and the farther he goes, the warmer his reception. The Africans and Asians we’ve worked with have found in this late medieval friar’s writings on faith and grace, sin and law, left-hand and right-hand kingdoms the answers to the questions plaguing their churches, their people, and their societies. The western and northern Europeans are generally slower to warm up, a little bored with the theologian who taught the ubiquity of Christ but inadvertently became ubiquitous himself. By the end we could usually bring them around. Still, I postulate a Law of Luther Reception: there is an inverse relationship between Luther’s cultural importance and that culture’s ability to hear him.

Which brings us to the question of Luther reception in our own equally exotic, if all too familiar, United States of America.

Painting of Luther as an Augustinian monk from the workshop of Lucas Cranach the Elder [Public domain], via Wikimedia Commons