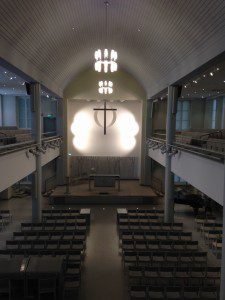 Church buildings used to be made so that they would be beautiful.  This was true not only of Gothic cathedrals but also of small Protestant churches, whose simplicity and lack of adornment had a classic, elegant aesthetic impact of their own.

This is not so true of churches built over the last 50 years or so.  They tend to be utilitarian, plain, drab, unsymmetrical, and often, well, ugly.  But this appears to be changing.

I discuss what happened after the jump.  I also tell about this striking example of contemporary church architecture that we saw in Finland, which reflects the history, struggles, and victories of confessional Lutheranism in Scandinavia.

One of the chief culprits in the uglification of modern churches, surprisingly, was the Catholic church.  So says an article in the Catholic webzine Crux.  Fr. Dwight Longenecker says that “the spirit of Vatican II” led many priests to get rid of the art in their sanctuaries, as if emulating the iconoclastic Protestants, making them empty and plain.  Meanwhile, church architects designing new buildings followed the flat-roofed, unadorned functionalism of modernist architecture, which Vatican II devotees embraced out of a desire to reject Catholic traditionalism and to become modern.

This also influenced Protestants.  More recently, though, they have gone even further.  Under the influence of the church growth movement, “worship spaces” have been designed to imitate culturally-popular buildings such as theaters, concert auditoriums, and shopping malls.  Even churches that don’t go in that direction, under the pressure of finances and the obligation to “be good stewards,” congregations have been putting up structures of cheap prefabbed materials for the strictly pragmatic purpose of having a place for people to meet.

To be sure, people can pray and worship in any kind of building, a sheet metal quonset hut no less than a baroque chapel.  But churches of the past, even those on a budget, wanted to evoke “the beauty of holiness” and to make structures that would glorify God.

But now, churches are starting to get beautiful again.  Church architects are paying attention once again to aesthetics, symbolism, and meaning.  Fr. Longenecker says that contemporary Catholics are renovating their uglified churches and building new ones in harmony with the traditions of Christian architecture.   He gives some rather shocking photographs of old churches, their “spirit of Vatican II” uglification, and then their recent re-beautification.

I have the impression that the same thing is going on among Protestants.  Let me know if you can give examples.  I will offer one from my recent sojourn in Finland.

This photograph, made by my wife who makes it freely available, is of Helsinki’s Luther Kirkke (Luther Church).  Though the building has historic significance as a site of an important Lutheran revival, the state church in recent years had no use for it and sold it to some entrepreneurs who turned it into a nightclub.

But a few years ago, the new independent group of confessional Lutherans, the Finnish Mission Diocese, bought it and turned it back into a place of worship.

The renovation exhibits the acclaimed Scandinavian design at its finest.  Going into the sanctuary filled me with a sense of awe and reverence, just as medieval cathedrals do, though the appearance is very different.

Everything was this light grey color, evoking seriousness but also a strange joy.  Darkness is countered by light, an image of law and gospel.  Small high-intensity lamps are scattered everywhere.  And what is most striking and what dominates the sanctuary is the unearthly circle of light over the altar, encompassing and drawing attention to the cross.

That cross was from the original building. When the building was remodeled into the nightclub, it was thrown in the garbage .  A neighbor pulled it out of the trash.  When the church was being restored, he gave it back to the congregation.  Now it is bathed with light.

The sanctuary is not ornate.  The Mission Diocese is pretty high church.  There is even a confessional for private absolution.  Not built as the Catholic booths, in which the priests do not see the penitent.  This confessional is designed as a kind of double chair, in which the pastor and the repentant sinner face each other. The whole is enclosed with a curtain, ensuring and symbolizing the  confidentiality of pastoral care.  Still, the sanctuary lacks the statues and paintings one can find in some Lutheran churches in Europe, reflecting the more subdued Finnish style.  But there is lovely visual art in the handmade embroidered textiles–a characteristic Finnish artform–that make up the paraments and banners.

The outside looks just like another old building, not even necessarily a church, which is how it was originally designed in the 19th century.   But go inside and you find the sacred.  The inside includes offices for the Mission Diocese and its ministries and well-used, well-laid-out spaces for Bible studies, discussions, and other gatherings.  And then there is this sanctuary.  Most church buildings in Finland are more or less empty on Sundays.  This one is filled with hundreds of worshippers in multiple services.

The sanctuary of Luther Kirkka conveys the history, the struggles, and the glories of confessional Lutheranism in Finland.  The vaults and columns of the old sanctuary are preserved, as is that despised but now illuminated cross.  And yet at the same time, the design seems new, even cutting-edge.  fThe architecture has the sense of both the ancient and the contemporary, just like Christianity.