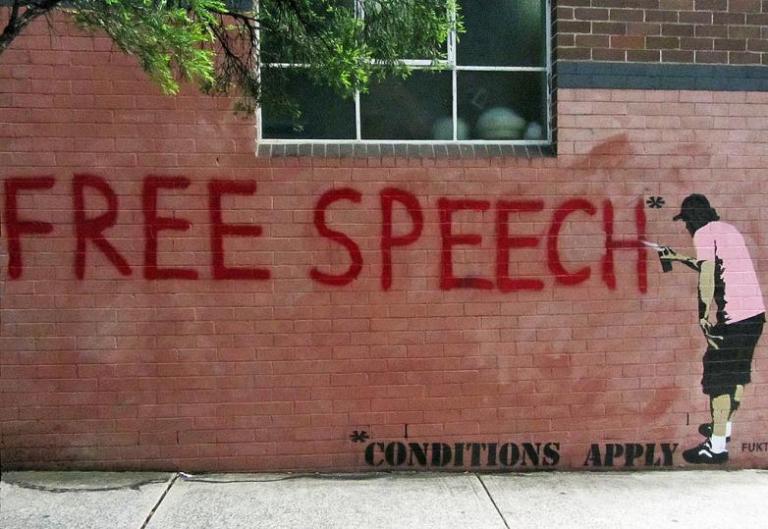 Though the American Civil Liberties Union has become pretty much just another liberal interest group, on one civil liberty issue it has remained firm:  the freedom of speech and the freedom of assembly.  Thus, the ACLU defends the right of everyone to say their piece in the public square, including the Ku Klux Klan, Westboro Baptists, and other noxious groups, going so far as to intervene for them in the courts.  The ACLU is also defending the white nationalist protesters in Charlottesville.

This is too much for some of the ACLU’s supporters.  At least one board member has resigned, donors have closed their pocketbooks, and many liberals are criticizing the policies that extend free legal aid to those who hold such abhorrent ideologies.

Such criticism is completely understandable, but the ACLU counters by making the point that “we all need to defend the speech we hate”; otherwise, freedom of speech means nothing.

This can be debated and there might be some lines that could be drawn.  But, as so often happens, in the heat of debate, more extreme measures get proposed.

The New York Times has printed a column by K-Sue Park entitled The ACLU Needs to Rethink Free Speech.  Applying the familiar post-Marxist analysis, she makes the point that the rich and powerful have more access to free speech than do the poor and marginalized.  Therefore, the ACLU’s policy of defending everybody’s free speech no matter what, puts the latter at a disadvantage.

But if limits need to be placed on the speech of the rich and powerful–though she specifically targets “right wing” speech–who will enforce that?

Charles C. W. Cooke has written a rejoinder to the New York Times piece entitled “Yes, Let’s Rethink Free Speech.”  Using a satirical, ironic, Modest Proposal approach, Cooke makes the point that the final arbiter of what speech will be permitted and what will not is going to be the government.  Right now, the federal government is headed by President Donald Trump and most state governments are firmly in the hands of Republicans.

Do liberals really want them to control what speech is allowed?

Yes, leftist regimes tend to impose speech codes and to punish dissenting voices.  But the left does not completely control the United States, at least not at this point in dialectical history.

Until then, maybe even leftists should support what the Times piece derides as the “narrow reading” of the First Amendment that “is the result of 50 years of unanimous Supreme Court precedent.”