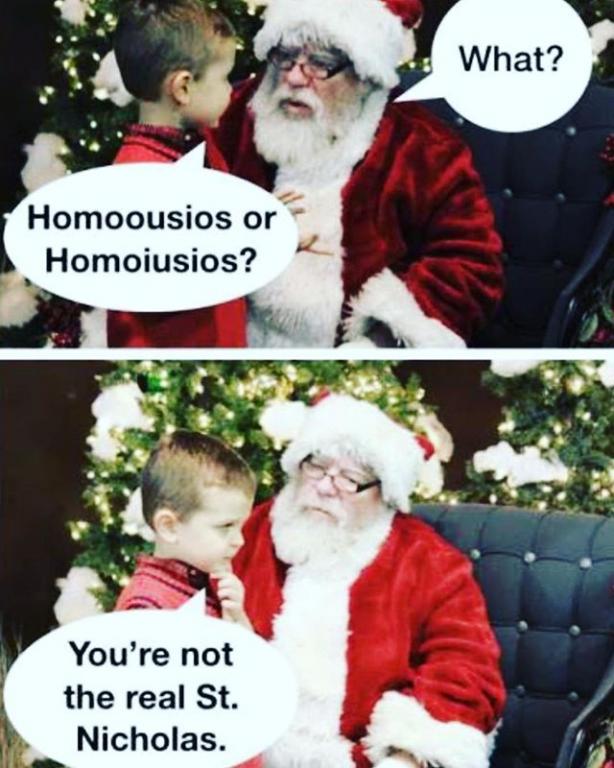 Pictured above is my favorite meme of the season (HT:  Mary Moerbe).  The point is that the “real St. Nicholas” was said to be at the Council of Nicaea, where a major theme of the debate was whether Christ was “homoousios”–meaning “one substance”–with the Father, or “homoioousios”–of similar substance with the Father.  In other words, is Christ truly God, as St. Nicholas and the other orthodox bishops believed, or is He just similar to God, a very special creation, but just Man and not God, as Arius and his faction believed.

St. Nicholas was so zealous for the deity of Christ that he actually is said to have assaulted Arius.  (I wrote about this in a column for WORLD that keeps circulating on the internet.  But read my updated, more historically-accurate version here.)

A recent survey found that 78% of evangelicals believe that “Jesus was the first and greatest being created by God the Father,” which is the Arian position.  That may have just been a confusion, but I have read and listened to lots of Christians go on about God as if He had never been incarnate in Jesus Christ.  Shoppers beware:  Saint Nicholas, a.k.a. Santa Claus (say “St. Nicholas” real fast), is kind to children, but if he suspects you of Arianism, he might get violent.

So to keep that from happening, let us reflect on what the Nicene Creed, which St. Nicholas likely had a hand in, says about the deity of Christ and His advent.  Next week, we’ll discuss the next part of the creed, which explores the humanity of Christ.

in one Lord Jesus Christ, the only-begotten Son of God, begotten of His Father before all worlds,

One of my complaints about most modern Bible translations is their indifference to creedal language.  (The other is their propensity to translate away divinely-inspired metaphors and other figurative language, thus flattening out the literary power of the text.)  The NIV renders John 3:16 so that it says Christ is God’s “one and only son.”  The KJV, in contrast, says that Christ is the “only-begotten son.”

Both are legitimate translations of the Greek monogenes, but the former violates the principle of Scripture interpreting Scripture.  Christ is not God’s “one and only son.”  As St. Paul says several times, all Christians, all the baptized, are sons of God (including women, who thus have the Biblical status of sons):  “. . . in Christ Jesus you are all sons of God, through faith.  For as many of you as were baptized into Christ have put on Christ”(Galatians 3:26-27).  But, as St. Paul also says several times, we are sons by adoption (Galatians 4:5).  Christ is the “only begotten son.”

This is not a reference to His conception by the Holy Spirit of the Virgin Mary.  That comes later in the creed where it sets forth Christ’s human nature.  We’ll talk about that next week.  Here, in the inner workings of the Trinity, the Son of God is “begotten of His Father before all worlds.”

Not that the Son is “God’s God,” as it may sound.  He is God from God, consisting of God.  Also, “very” here does not mean “extremely,” but “truly,” as in “verily, verily I say to you. . . ”  And yet the English has a felicitous connotation that is quite valid:  Christ is “extremely God,” just as He is extremely Man.

I am fascinated by the confession that, as Jesus say of Himself, “I am the light of the world” (John 8:12).  There was a time when science seemed to diminish nature, but now science just seems to make the natural order even more mysterious.  According to contemporary physics, light is one of the most mysterious things in existence:  How light can be simultaneously a particle and a wave is almost as confounding as how Christ can be simultaneously God and Man.  And yet, light–specifically the speed of light (and what impels it to travel so fast?)–is the universal constant.

Contrary to the Arians, the Son of God was not created, like we human beings and the universe were.  Again, He was begotten.  That means that He is the same sort of being as His father.

Yes, Stephen Colbert can be annoying because of his liberal politics, but he is a practicing Catholic.  I watched him interviewing a guest on his show, one of the New Atheists, who was denying that Jesus ever thought of himself as being divine.  Colbert said, “The son of a duck is a duck.  The son of God is God.”

being of one substance with the Father,

by whom all things were made;

The Biblical source of much of this Christology is John 1, which speaks of the Second Person of the Trinity as the “Word” who was with God, who was God, and who became flesh.  The Greek for “Word” is Logos, a familiar and rich term in classical thought.  Logos is the source of our word “logic.”  It has to do with the fundamental ordering principle that underlies all things.  Think of the Logos–of Christ–as the Mind of God, the rationality of God, the design of creation.  That’s who Jesus is.

who for us men and for our salvation came down from heaven. . . .

He continues to come to us, by means of His Word and Sacraments.  And He will come again in glory to put everything to rights.

This is what Advent is about.

Next week:  Advent, St. Nicholas, & the Humanity of Christ. 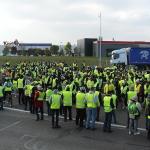 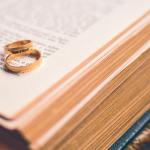