The Lamb of God with Human Eyes 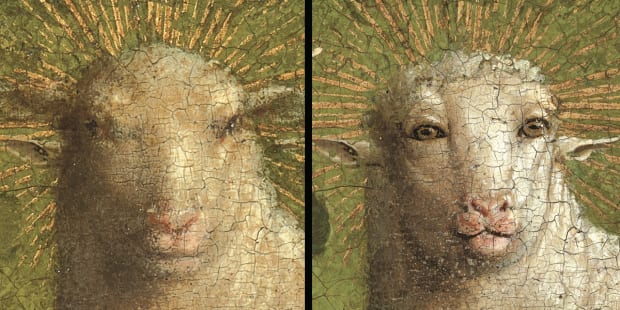 The altarpiece in the cathedral of Ghent in Belgium has been called “the single most important painting ever made.” 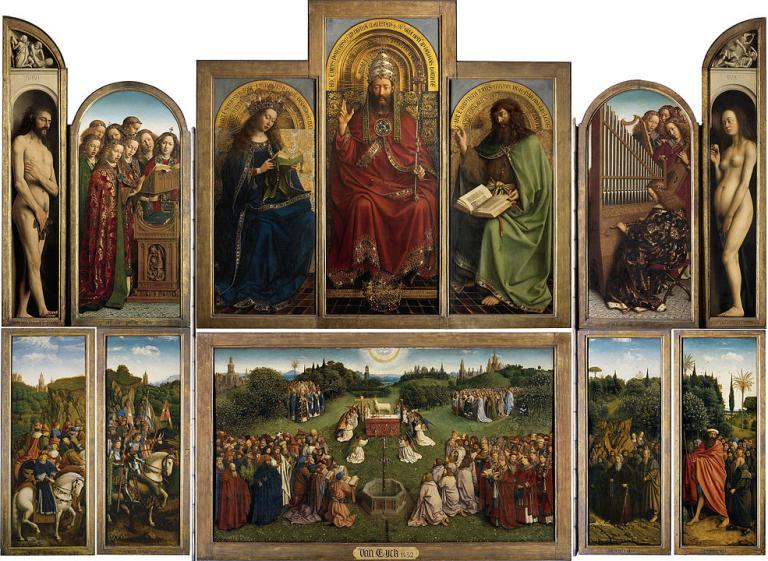 Completed by the brothers Hubert and Jan Van Eyck in 1432, the work was the starting point of Renaissance art.  The first great oil painting, the Ghent altarpiece employed innovations that artists would emulate ever since:  techniques of perspective, light and shadow, composition, and an unprecedented realism.

The central panel of the painting, “The Adoration of the Mystic Lamb,” shows diverse groups of people and angels–each of whom has a unique face and details down to the glint of light on their rings and the hairs of their heads being numbered–adoring “the lamb of God who takes away the sins of the world” (John 1:29). 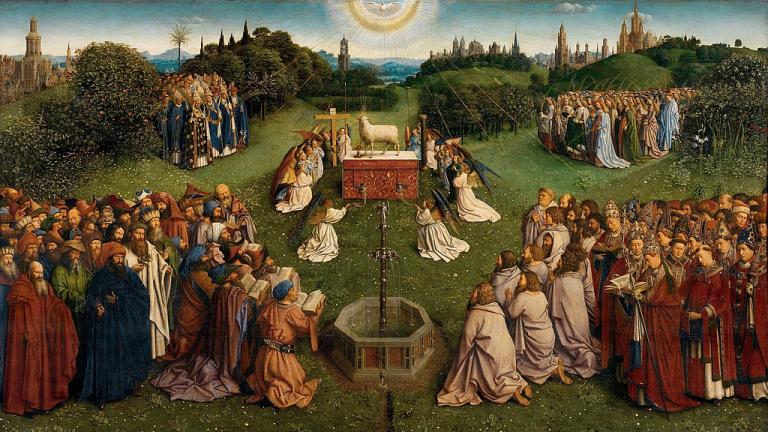 The Lamb stands on an altar.  He is wounded.  His blood flows into a chalice.  The groups of figures have been identified as Biblical prophets and apostles, martyrs, churchmen, and contemporary figures.  Together they depict the members of the Church, who worship the Lamb along with the angels and archangels of Heaven.

The painting, with the Fountain of Life in the foreground, depicts the climactic vision in the Book of Revelation, with the “great multitude that no one could number, from every nation” (Revelation 7:9) joining together to adore the source of their salvation.  In the background is a city–the New Jerusalem–but the landscape is not ethereal, but the world we know.  This is the Marriage Feast of the Lamb in the New Heaven and the New Earth (Revelation 21).  But this glimpse of the Church in glory is also the Church that we are part of on earth.  The Lamb’s blood in the chalice is what we Christians receive from our altars in Holy Communion.

The Ghent Altarpiece is one of the great monuments of Christian art.

Recently, the nearly 600-year-old painting underwent a restoration that took three years.  Layers of dirt, varnish, and overpainting were painstakingly removed to restore the painting as it originally appeared.  When they did, the conservation team made a stunning discovery. The original face of the Lamb turned out to be completely different from the one that the world had become familiar with.  The Lamb has a human-like face.  Most strikingly, the Lamb has human eyes.  Their effect is uncanny, as if they are looking right through the viewer.

The conservation team was exhilarated, saying in a statement, “There are no words to express the result. Liberated from the thick layers of yellow varnish and the coarser overpaints, we can discover the Van Eycks’ sublime virtuosity in abundance.”

But much of the general public found the image “shocking”  and “alarming.”  On social media it was described as “nightmarish.”  One tweeter said, “the lamb of the ghent altarpiece was a mistake and whoever painted over it was right to do so.”  An article at LiveScience, entitled Why This 15th-century “Jesus-Lamb” Painting Is Creeping People Out”, warns, “you may have a hard time unseeing it” and describes the Lamb as “weird” and “overly confrontational.”

Friends, this is not a painting of the fluffy barnyard animal, as in “Mary Had a Little Lamb.”  This is a great artist’s rendition of Jesus Christ.  Van Eyck takes a Biblical symbol–one that underscores Christ’s blood sacrifice for our sins–and makes it come alive as simultaneously a lamb and the man Jesus.  Who is also simultaneously a man and the true God.

It’s very difficult for artists to portray Christ.  How is it possible to suggest His two natures?  Efforts tend to show Him either as  human (as in the sentimental Victorian pictures well-known from Sunday School) or as divine (as in the scary Christ Pantocrator judge of medieval icons).  A work that fails to evoke both of His natures falls short.  But so does a work that fails to evoke not only who Christ is but what He means and what He did for us.  The challenge is not insurmountable, as there are many efforts that succeed, but it isn’t easy.

Van Eyck succeeds, not in the usual representational ways, but in working with a symbol.  His task here is not rendering the two natures of Christ, as such, but taking a figure from the Bible and evoking its meaning.  Here the spiritual and the physical come together, as in the Incarnation.  And this Lamb that has been sacrificed, yet lives, evokes Christ’s resurrection.  And that the Lamb’s blood pours into a chalice for all of these people to drink depicts the Gospel itself, the “cup” that Jesus describes as “my blood of the covenant, which is poured out for many for the forgiveness of sins” (Matthew 26:28).

Is Jesus “uncanny”?  “shocking”?  “confrontational”?  Does He see right through you?  Does He make people feel uncomfortable?  Oh, yes.

May 27, 2020
Another Revision of Marriage: Utah Decriminalizes Polygamy
Next Post