First Came the Declaration, then the Achievement

First Came the Declaration, then the Achievement July 3, 2020 Gene Veith 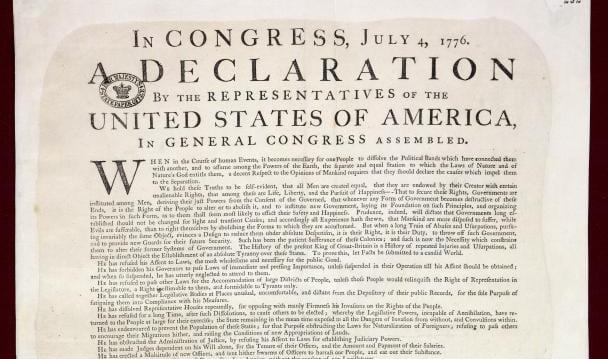 “America’s birthday” is not October 19, when the British army was defeated at Yorktown in 1781.  Nor is it September 3, when Great Britain formally granted its American colonies independence with the Treaty of Paris in 1783.  Nor is it June 21, when the U.S. Constitution was ratified in 1789.

The foundation, though, for the new nation was clearly declared:

Just as political independence was a long time in coming, personal independence–the principles of equality, rights, life, liberty, the pursuit of happiness–would also take a long time to be realized.  Indeed, like other ideals, they are never fully realized, and we must always struggle to live up to them.  But that by no means invalidates them.

According to the New York Times, “America’s birthday” is August 20, when the first slaves were brought to Virginia in 1619.  The newspaper’s 1619 Project echoes the contention of some progressive activists that the institution of slavery was the true founding of the United States of America.  If this is true, the nation is intrinsically racist, oppressive, and evil.  It follows, as we have been blogging about this week, that, according to some Americans, we should start over completely, with a new name, a new flag, a new constitution, a new economy, a new language, and a new culture.

In this view, the essence of America is not freedom, but its opposite:  slavery.  The founders of the new nation were not really interested in “independence” but in establishing its opposite:  bondage.  The Declaration of Independence was written by a slave owner.  Thomas Jefferson did not apply equality, rights, life, liberty, and the pursuit of happiness to his slaves.  Therefore, according to this view, the Declaration of Independence is a lie.

First of all, the truth of an idea is not refuted just because the person who holds it has a bad character.  That is the ad hominem fallacy.  Just because Jefferson didn’t live up to his own ideals does not mean the ideals are not valid.  Nor does his personal failure take away from his achievement in articulating those ideals.

The preamble to the Declaration of Independence is a not a lie.  The founders from all of the thirteen colonies–those who owned slaves and those who even then opposed slavery–voted to approve the document unanimously, making a common commitment:  “We hold these truths.”

The liars would be those who, by their words or by their actions, deny that all men are created equal and that their Creator endowed them with the inalienable rights of life, liberty, and the pursuit of happiness.  Even those who signed that document–or the one who wrote it–would thus be denying “these truths.”

That parts of American society were contradicting those founding ideals was recognized even at the time.  The Declaration of Independence became a rallying call for those who wanted to abolish slavery.  It took the Revolutionary War to win political independence, and it took the Civil War to win independence for the slaves.  And even afterwards, it took the Civil Rights movement to ensure that black people are included in those founding declarations.  Martin Luther King, Jr., said it best:  “When the architects of our great republic wrote the magnificent words of the Constitution and the Declaration of Independence, they were signing a promissory note to which every American was to fall heir.”

Today, in this annus horribilis 2020, Americans are still struggling to implement these “truths.”  Racial equality is still an issue.  We still must contend for our “rights.”  The right to “life” is being denied to infants.  “Liberty” is under assault.  There is, perhaps, more consensus over “the pursuit of happiness,” but different people’s “pursuits” and definitions of “happiness” creates conflict.  And it may well be that none of these principles can last for long without belief in a “Creator.”

Illustration:  The National Archives UK / No restrictions via Wikimedia Commons

July 2, 2020
China's Cultural Revolution and Our Own
Next Post