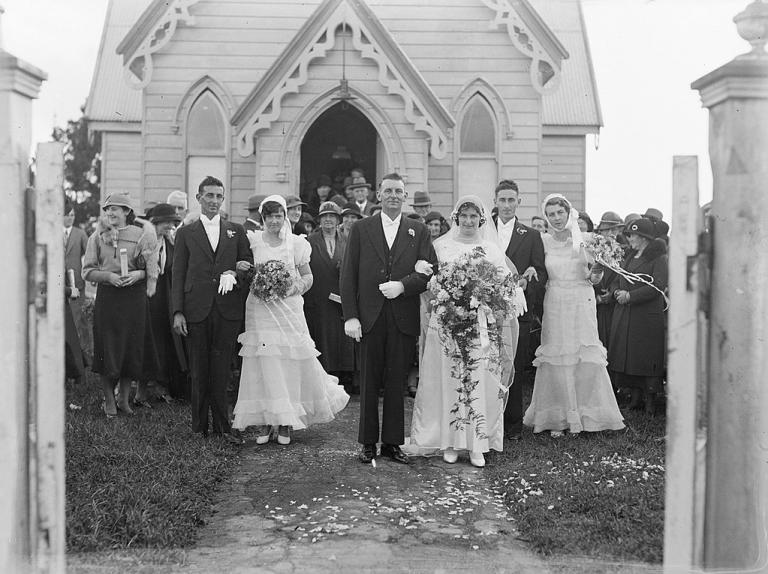 Michael Warren Davis has written a provocative piece in The American Conservative entitled Give Me That Old Time Religion, with the summary “We recognize that our ancestors had something good—something we lack, something we lost.”
In the course of discussing how we are confusing political ideologies and sociological definitions for actual religion, he makes the point that we have lost the transcendent connotations of that word.
As an example of what we have lost, he cites weddings:

Today, weddings are seen as an ending. It means you’ve found the person you want to “settle down” with—at least in theory, and at least for now. Traditionally, weddings are a new beginning. The couple was undertaking a grave new responsibility, not only to themselves, but to their neighbors. It solemnizes their promise, both to each other and to posterity. The community rewards and encourages them by throwing them a party and buying them presents.

Yes, it’s a celebration of love. But we don’t throw parties every time someone falls in love. We throw parties when that love inspires two young people to take upon themselves the duty of continuing the human race. And we expect them to make good on their promise—to each other, to their children, to us—even when that initial attraction fails. That’s why we say, “Till death do us part.”

Traditionally, when a couple is expected to have been chaste, marriage is also a kind of initiation into sex. That’s what a honeymoon is for. It’s so they can spend a whole week in bed. If you’re a young adult who’s practiced abstinence all your life, that’s all you really want after a wedding: a week in bed. Today, when couples live together for years before getting married, it is almost the opposite. It signals that they’re finished having fun. They’re not going to sleep around anymore. Again, we use that horrible phrase “settle down.” Marriage isn’t the beginning of their sex life. It’s the end.

But children are the main thing. At weddings today, you sometimes hear folks ask the bride, “Do you think you guys will have kids?” In the old days, the question would be absurd. That’s what it’s all about: starting a family together. That’s why wedding presents are traditionally useful things, like towels and pots. The whole community gets together to help this young couple start a household together. Why? Because, without families, communities can’t reproduce themselves. We all have a vested interest in helping newlyweds become established, so they can be fruitful and multiply.

Today, he says, the pattern is often that couples who have lived together since college eventually throw themselves a wedding that is actually just a party, setting up gift registries to finance a vacation or some such, rather than to set up a household.  Once married, they often put off having children until they can’t have any, and then leave each other.

The author is a millennial, and he says that members of this generation can’t help but see that their grandparents had more successful relationships than their parents.  This is because in their grandparents’ generation, divorce was mostly taboo.  As a result, they learned how to work out their problems.   The parents of millennials, though, were in the easy and frequent divorce generation.  It’s no wonder that young adults today often have a distorted view of marriage, or never bother with the institution in the first place.

Cutting off marriage from “starting a family,” like cutting off sex from procreation, changes marriage profoundly.  It isn’t just same-sex marriage that has changed the institution.  Indeed, if marriage is only about finding a romantic partner, as much of the public assumes, why shouldn’t same-sex couples get married?  But marriage is much more than that.  It is the point at which nature and society–and religion–come together.

What are some other examples of confusing an “end” with a “beginning”?  Now at graduation time, we might often hear in the ceremonial speeches at such occasions, that graduation is not just the “end” of one’s education, but the beginning–a “commencement” –of adult life.  Death is the “end” of one’s life, but, for the Christian, it is also the beginning of eternal life.  what else?

May 25, 2022 What Americans Have in Common & What Divides Us
Recent Comments
0 | Leave a Comment
"Ah, yes, Wordle. I missed "gawky" too-- it's a weird word, the more you say ..."
Amaryllis What Web Sites Would You Recommend?
"Joe, mine was just a general outline. I kind of like having some manner of ..."
reg MAGA vs. Trump
"I do wordle and quordle daily, and occasionally globle, but septle and waffle sound interesting!"
Heidi What Web Sites Would You Recommend?
"reg,I would first tie foreign policy to immigration. If our policies caused an increase in ..."
Curt Day MAGA vs. Trump
Browse Our Archives
Related posts from Cranach