The Fundamentalist Who Gave Us Modern Technology 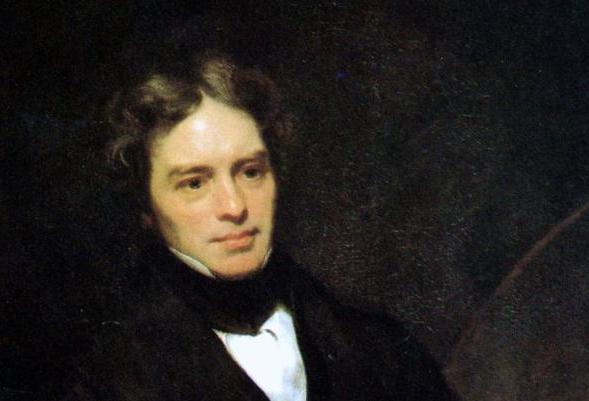 September 22 marked the 231st anniversary of the birth of Michael Faraday (1791-1867), the British scientist whose discoveries and inventions gave birth to much of the technology we enjoy today.

Faraday worked out that if you move a loop of copper wires around a magnet, you can generate electricity, a discovery that led to the electrification of the world.

He also worked out the converse of this electrical generation, that electricity going through a loop of copper wires can make a magnet spin, creating the electric motor.  This is the device that runs virtually all of the gadgets we depend on today–vacuum cleaners, dishwashers, refrigerators, air conditioners; power tools and factory equipment; printing presses and computer printers; mass transit and electric cars.

Faraday also discovered that you can run electricity through a long wire to an electromagnetic relay switch on the other end, so that you can make things happen at long distances.  Faraday first demonstrated this effect by ringing a bell.  This effect developed into the telegraph, then the telephone, then the television, then—using Faraday’s theories of induction–wireless devices.

Those same electromagnetic relay switches, with open representing zero and closed representing one, gave us the first electronic computers, the switches later miniaturized–drawing on other of Faraday’s principles–onto semiconductor chips.

So every time you turn on the lights, run an appliance, adjust your thermostat, call someone on the phone, turn on your computer, charge up your computer or your phone by plugging it into an outlet in your home, or use just about any other piece of modern technology, thank Michael Faraday.

And Faraday was not just an inventor but an important experimental scientist, whose findings would lead other scientists to discovery after discovery, to this very day.  In physics, he was the first to identify and describe the workings of electromagnetic fields.  He also made extensive contributions to chemistry, from electrolysis to the bunsen burner.  Just read his Wikipedia article and marvel at his contributions.

According to that article, Einstein kept a picture of Faraday in his study.  Ernest Rutherford, the father of nuclear physics, said of him,”When we consider the magnitude and extent of his discoveries and their influence on the progress of science and of industry, there is no honour too great to pay to the memory of Faraday, one of the greatest scientific discoverers of all time.”

Andy Kessler, writing in the Wall Street Journal, pays tribute to Faraday in his opinion piece (behind a paywall) A Faraday Is Worth 1,000 Faucis, with the deck “The inventor of the dynamo would have plenty to say about our scientific ‘experts.’”

Kessler addresses data showing that the public’s trust in science has declined dramatically, something he attributes to the COVID pandemic, with its contradictory and counterfactual proclamations from “the Science,” which often tried to silence researchers who questioned the party line.  He gives other examples of scientific malpractice, from the intrusion of woke ideology into the profession to the replication crisis in academic journals.

Faraday, though, according to Kessler, was a different breed.  He goes over some of the accomplishments I list above and gives some great quotations from Faraday, showing his humility and open-mindedness:

“A man who is certain he is right is almost sure to be wrong.”

“I could trust a fact and always cross-question an assertion.”

“He is the wisest philosopher who holds his theory with some doubt.”

“Nothing is too wonderful to be true, if it be consistent with the laws of nature.”

What Kessler does not get into, however, is that Faraday, one of the greatest scientists of all time who can be thought of as the father of our modern technology, was also a devout Christian.  Not only that, Faraday was a fundamentalist.

By that, I do not mean anything pejorative, as the word is often used today, but in the literal sense of the term.  Faraday was a life-long member–indeed, an elder–in the Sandemanian or Glasite church, a sect, named after their founders, devoted to a literal interpretation of Scripture, separatism from the world and from other Christians (holding to both closed communion and the rejection of prayer fellowship), and strict requirements for all members.

According to the Wikipedia article on the sect, the Sandemanians (as they were called in England and America) agreed mostly with the Westminster Confession, the Calvinist statement of faith of the Church of Scotland from which the movement broke away, except with its teachings on the church and civil government.  They also had an idiosyncratic view of faith, which they understood as simply intellectual assent.

They had problems with wealth and “worldliness”–Faraday refused a knighthood and other honors–and demanded that members attend all of the church’s meetings.  Faraday once missed a “Love feast”–a church dinner, held in addition to the Lord’s Supper–because he had been summoned to an audience before Queen Victoria, and was excommunicated for awhile not just for missing the dinner but for arguing that he had to obey his monarch, which violated the church’s teachings about the civil magistrate.  He was later re-instated.  The denomination is now said to be extinct.  (For discussions of Faraday’s faith and its relationship to his scientific work, see this and this.)

I’ll close with one of Faraday’s many Christian quotes:

“No outward manifestation can give either instruction or assurance to him, nor can any outward opposition or trouble diminish his confidence for Christ crucified, to the Jews a stumbling block and to the Greeks foolishness; but to them who are called, Christ the power of God and the wisdom of God. The Christian religion is a revelation and that revelation is the Word of God.”

September 23, 2022
The Two Kinds of Integralism vs. the Two Kingdoms
Next Post