When my daughter was a little girl she didn’t like stories with bad-guys in them. Whenever a bad-guy would enter a tale she would thrust her head beneath her pillow and that would be the end of that story.

Since I made up the stories I told my children, I could fashion them with their tastes in mind. But telling a story without bad-guys (or any narrative tension in this case) is pretty tough to do. It’s all rainbows and kittens without them. That was just fine with my daughter, when she was small anyway. Today she enjoys Jane Austen and J. R. R. Tolkien.

This got me thinking about the challenge of portraying evil more generally when it comes to story-telling. Christians who write sometimes wonder how much is too much when it comes to describing the deeds of the wicked. Is description a kind of participation in wickedness? I write for young adults, and based upon what some mothers tell me, yes it is.

I agree to an extent. You can be overdo it. When I read some fiction I wonder if the author doesn’t vicariously enjoy the deeds described. (I must confess, in some cases that’s true for me. But for me it is pretty mild stuff–I mean, it’s hard not to enjoy laughing diabolically.)

But does that make me guilty, at least in some small measure?

Hold that thought. Now consider this if it is true that I’m responsible for the characters I dream up, am I also praiseworthy if my protagonist overcomes the evils I describe? How about if I take it a step further? What if I could actually enter my stories and be the hero, not just vicariously, but really and truly?

To give you a sense for how my mind works, this line of thought brings me to the problem of divine sovereignty.

When people say this to me I suspect that what they really mean is the engineer of evil, because if you’ve ever written a story you know that your characters tend to take on lives of their own.

I think most objections to divine sovereignty arise from a misplaced metaphor.

The metaphor I’m thinking of here the machine. Modern people tend to view the cosmos as a mechanism rather than a government made up of layers. Machines don’t leave space for agency, the designer is the only agent you need to consider. So if there is a problem, its the designer’s fault. But if the cosmos is made up of many agents, then you’ve got something much more complicated to think about.

The Bible presents us with a God who is both the Creator and the Lord. And while our mechanical creations resemble his creatures, there is an important difference. His creatures are real, with real agency. This is why his work didn’t end at the end of the sixth day. On the seventh he entered his rest, meaning, he sat upon his throne to govern what he had made. Paradoxically, I think this is what Jesus was getting at when he said that his Father was still at work (at least in part). (John 5:17)

This way of looking at things can make some people a little nervous. If space is given for real agency, doesn’t that in some sense compromise divine sovereignty?

If that’s you, you may mentally inhabit a machine cosmos.

The wisdom of God guides his judgements. And his throne is located above every created thing. Nothing surprises him, and nothing leaves him flummoxed, because he’s seen it all before. In fact, from that lofty height, he sees it all at once. And when it comes to the story of the world, he has entered it and done for us what we couldn’t do for ourselves so that he is both the creator of this creation and the next.

Intuitively this just seems right to me. I suspect its because I’m a writer of stories. Which has gotten me thinking: perhaps there should be a course or two in our seminaries to get preachers in training writing their own stories?

If I were in charge of a seminary I could easily make room for this. Most of the practical courses I took I haven’t been able to find a use for. 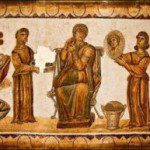