How Big Is Too Big?

In the original Twilight Zone there is an episode entitled, The Last Night of a Jockey, in which the famously short Mickey Rooney has been disqualified from racing horses. His small stature, once an asset, is now a liability. Now he wants to be big. In the course of the show he is shown that he has always longed to be big, big and important, that is. And that is why his conscience accuses him of always being small. So he gets his lesson when magically his wish becomes literally true. He’s made big, too big to ever ride a horse again. In fact, he’s too big for anything, even getting out of his room. Then comes the phone call–he’s given a second chance to go back to racing. But now, he’s too big to ride. The episode ends with Rooney weeping and saying over and over again, “I’m too big!” Here’s the condensed version:

It is paradoxical, or maybe it is better to call it ironic, that in our modern world, where things are said to be void of meaning, we turn to size to measure significance. Take writing, something I know a little something about. Aspiring authors are informed that the quality of their writing, and even their ideas, is not as important as the number of followers that they have on Twitter. Or take something else I know a little something about, builders are seldom judged by the quality of their craftsmanship. What counts is the size of the things they build, or how many people work for them.

Most of us will never have a huge following on Instagram or own a multimillion dollar business. Instead most of us will be consigned to being insects in a world where size is what matters. Humiliatingly, many of us will be made to serve the purpose of making other people feel big, either as “followers” or employees.

The whole arrangement strikes me as profoundly stupid.

We have loads of evidence that people are made to live in relatively small, face-to-face communities. We can only know so many people, after all–even those of us with a million subscribers on YouTube. For an example of what I’m getting at, most Protestant churches plateau at about 120 people in attendance for Sunday morning worship. Sociobiologists tell us that this is due to the fact that our ancestors lived in small groups of roughly this size for thousands of years. We’re wired for it, they say. For a church to grow larger than this it must be transformed into something that resembles a business corporation, with all organizational meetings, packaging and programs, and anonymity that goes along with that. It has always seemed to me that more is lost than is gained when this happens.

Necessarily that means there are fewer winners than their used to be.

I think most people feel the loss, but the price of significance probably means going small. And that seems like too steep a price to pay. But if more of us are going to win, more of us will have to accept the limits that come with being human.

When we accept the gift of our humanity, and the scale that comes with it, our institutions, and even our architecture, are more welcoming and suited to us. Instead of going big, we’re more likely to go deep. We’re not as restless, or envious, and we enjoy ourselves more.

And the place where this really comes home, is home. While it is true that even a household can get too big, for most of us that won’t be a problem. The problem in this time of household dissolution is keeping enough people together to constitute a household. Now, the reason households tend to remain human in their scale is they have built in limits. A husband and wife can do more together than they can do apart, but even so, there is only so much that they can do. And if they are monogamous, there is a physical limit to the number of children that even the most fecund couple can have.

Then, naturally, when the kids are grown they want households of their own. The trick at that point is keeping the branches of an extended household (made up of smaller houses) working together productively. (A trick, by the way, that is actually getting easier in our day due to the paradoxical implications of information technology.)

And this brings me to my closing point. We live in a time where the centrifugal and centripetal forces of modern culture may have reached an equilibrium. Poised here, it is more a matter of what you do with it. And that comes down to imagination and desire. (I suspect it will also be a matter of necessity soon.)

Where this can be enriching is with a rediscovery of the depths. We’re often blind to depth, we can’t see the treasures beneath the surfaces. The blindness may be due to ego, our standing in the way of our own interests. It may be due to a failure to attend to them, i.e. an unwillingness to stop and think. It may be due to artlessness. Classically the arts were concerned with likenesses and how surfaces could reflect realities deeper down. These are all probably true, and more besides.

I suppose these problems have always been with us, making us dull to the things we must work to see. But knowing our limits has a way of pushing us through the inertia. Because the boundaries frustrate us, we push in new directions, downward into the meaning of things, and upward to transcend the final limits of our lives. But in another paradox, we can all be rich. There are treasures in the field, but we must dig. If we remain on the surface there must be winners and losers. But even the winners lose in that world. 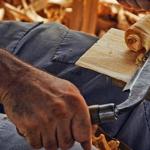 May 18, 2018 Manhood at First Things and Touchstone
Recent Comments
0 | Leave a Comment
Browse Our Archives
get the latest from
Evangelical
Sign up for our newsletter
POPULAR AT PATHEOS Evangelical
1

How the Loss of Family &...
Cranach
Books by This Author Books by PaterFamilias Today

Maysville-- Part Three
Who could imagine a violin shop inside a violin?  But Mr. Tracy...
view all Evangelical blogs
What Are Your Thoughts?leave a comment
Copyright 2008-2021, Patheos. All rights reserved.