The remains of King Richard III, found under a parking lot 530 years after his death at Bosworth Field, were reburied in Leicester Cathedral yesterday. The Catholic archbishop of Westminster, Cardinal Vincent Nichols, led the ceremony, which featured prayers, readings, plainsong, and a homily.

The reburial closes the book on a dramatic three years that witnessed the rediscovery of the king’s remains under a parking lot where Greyfriars Church once stood before being destroyed during the Reformation.

Cardinal Nichols’ homily can be read here. An excerpt:

At the sprinkling of his coffin, the prayer expressed our faith that the baptised are joined to the death of Jesus so that ‘through his merits, who died and rose again for us’ we may ‘pass to our joyful resurrection’, the destiny of all who open their hearts and lives to the living God.

This faith was also vividly expressed in the incensing of the coffin of the King. Traditionally, words accompany incensing: ‘Let our prayer arise before you O Lord, like this incense’. So too we trust that even as the incense rose before our eyes this evening, so too our prayer will be carried to the throne of God. Indeed, incense signals to us the presence of God. It is a sign of his majesty. We pray that, being brought into the presence of that Divine majesty, Richard may be embraced by God’s merciful love, there to await the final resurrection of all things in the fullness of time.

This is the horizon against which our actions take place on this solemn evening. With God there is a different timescale, a day is like a thousand years. So our prayers for this King of our Land, our prayers for his eternal rest, are not impeded or made invalid by the passing of these years. We pray for him today just as those who prayed for him at the time of his death in 1485, those whose hearts were not filled with the vengeance of victory or the hatred of an enemy. Among those who prayed for him then was the community of Franciscan Friars, so nearby here, who surely buried him with formal prayer even if also in haste.

So much that has happened in these intervening centuries. In 1538 stone and building materials were taken from that Church of the Greyfriars and used to repair the nearby St Martin’s Church, now this Cathedral Church of Leicester. It is surely symbolic that materials from the first burial place of the King are in all probability still part of the fabric of this building in which his remains are again to be laid to rest. Our Christian histories have become intertwined in a way, we pray, that will now lead to us give a more coherent and united witness to the truths of faith which we proclaim together this evening. 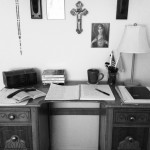 March 23, 2015 How I Pray: Melanie Bettinelli
Browse Our Archives
get the latest from
Catholic
Sign up for our newsletter
POPULAR AT PATHEOS Catholic
1

Cancel And Replace The March For...
A Little Bit of Nothing
Related posts from God and the Machine