Is This Synod the Most Dangerous Crisis in the History of the Church?

Is This Synod the Most Dangerous Crisis in the History of the Church? October 7, 2015 Thomas L. McDonald

It is to hear some people tell it. I think it was this video that got me thinking about Pius VI, but all the daft ranting of the past year certainly played a part in my realization that people have no context for what they’re experiencing. 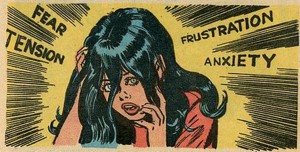 I’ve written a bit about Pius, his times, and the way they still impact our own for the National Catholic Register. Part of this is by way of urging you to ignore anyone saying this is “the most dangerous time in the history of the Church.” That’s pure bosh.

As I say in the piece, that’s cold comfort. The worst thing happening to the Church in our own times is the worst thing we can know. We have to deal with the problem in front of us. That’s the other reason I wrote about the particular period I did: in it lay the roots of the current problems. Here’s a bit of it:

The source of this crisis: the Extraordinary Synod of Bishops on the Family and the proposed revisions to the Church’s handling of divorced-and-remarried Catholics.

As crises go, it’s something less than, say, the early persecutions, the investiture controversy, or the Reformation, but one of the defects of modernism is that man feels himself at the center of history, in unique times where epic battles are being waged for the very future of the Church. (Note: An epic battle is always raging for the future of the Church.) It satisfies the tendency to self-dramatization and allows for free-form spleen-venting as people work out their issues under the guise of trying to save the Church from itself.

I don’t care to argue with individuals and pick apart their posts. It just doesn’t interest me, plus Scott Eric Alt has been doing that with intelligence, wit, and style.

This is how I prefer to respond because it’s in my wheelhouse, and I think drawing back to the long view always helps put problems in their proper perspective, understanding them not as isolated moments that we react to one after another, but as part of an ongoing process of steering the barque, making course corrects, and, sometimes, rushing for the bailing buckets.

The weirdest part is that in 2014, a bunch of Catholic pundits seemed suddenly to notice that a coterie of liberal bishops was trying to chip away at the fundamental truths of the faith.

Liberal bishops have been doing this since Arius.

The perfect storm that seems to have unmanned so many is a combination of America’s decline under Obama; always-on electronic media (you’re soaking in it!) and its Godwinian drift into extremes; the sudden resignation of Benedict XVI, a rock of orthodoxy and liturgical renewal; his replacement with the undeniably more progressive Francis; the return to prominence under Francis of some liberal bishops who we’d hoped we’d seen the last of; and the mad media spinning of everything coming from the Vatican as they try to shove it into their narrow left/right culture war narrative.

None of these things alone would have allegedly sober publications calling schism and apostasy “inevitable.” That’s not merely irresponsible: it’s dumb. Fears feed on each other. Social/political unease creates the disturbed ground on which anxieties and doubts about the Church take root. We fear the mad pace of technological, economic, and social change will sweep the Church into its raging currents.

That’s a completely legitimate concern, and so we counteract it by continuing to represent the truth and expose the lies. There’s a really loud minority, however, who rush to the extremes and say insane things like the Pope hates god and is trying to destroy marriage. It’s like the meme says: 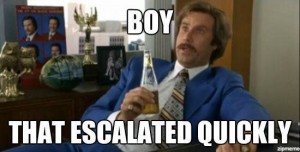 I only pay attention to the modern world when I have to. I’d like to think I have the pious faith of a medieval peasant, only with literacy and WiFi. I know that’s a pose, and I am very much a man of my generation. The transcendent affects each time in a different way, creating an irreproducible moment in the life of faith and the individual.

The Church is a bell summoning the world to conversion and repentance. The bell once rung fades until it is rung again, only next time it has a new tone, and each time thereafter. It’s the same bell, with the same clarity and the same heft. But each generation that turns to its sound hears the summons in a different way as the environment around both bell and sinner changes. The trick is to clear away the distortions and background noise that risk drowning out or warping the sound, and let our Truth–the only saving Truth–do what it’s supposed to do: draw sinners to repentance and salvation.

October 7, 2015 Want Some More Catholic History and Archaeology?
Browse Our Archives
get the latest from
Catholic
Sign up for our newsletter
POPULAR AT PATHEOS Catholic
1

What Not to Say to a...
Steel Magnificat
Related posts from God and the Machine