In the Company of Women, Part 2 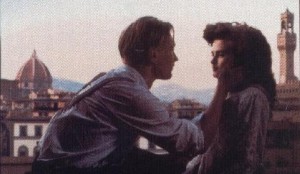 “You’re the sort of man who can’t know anyone intimately, least of all a woman.”

That may be the most stinging, hurtful reprimand I’ve ever heard.

Thank God it wasn’t aimed at me: Those words were spoken by Miss Lucy Honeychurch to her fiancé, Mr. Cesil Vyse, in 1985’s A Room With a View.

The insult broke their engagement. It also broke the poor man’s heart, just as it would have broken mine.

As I wrote yesterday in Part One, movies have influenced how I feel and what I think in the company of women.

Nuanced female characters who think for themselves, speak their minds with eloquence, and say even more with their silences, are more interesting to me than most male characters, who have a tendency toward arrogance, bluntness, and acting without thinking.

I remember feeling relief that Miss Honeychurch escaped a loveless marriage. She’d been convinced to break the engagement by another suitor—George Emerson who, throwing himself at her like a golden retriever, declared:

[Vyse] doesn’t know what a woman is. He wants you for a possession, something to look at, like a painting or an ivory box. Something to own and to display. He doesn’t want you to be real, and to think and to live. He doesn’t love you. But I love you. I want you to have your own thoughts and ideas and feelings, even when I hold you in my arms.

I’m sure that I rolled my eyes as that lovesick romantic’s speech set the girls around me to swooning. (Ah, Julian Sands—for a while there, you rocked their world.)

But his words stuck. I didn’t want to be ignorant, arrogant, or self-absorbed like Vyse. I wanted Emerson’s vision. Even as the movies were revealing what women could be, they were challenging me to become worthy of a woman’s company.

I began reflecting on the way men treated women in households I had known. My own family seemed a rare exception; my father cherished my mother and sought out her opinions. But elsewhere, fathers and husbands were often treated as kings, while mothers and wives remained in the background, treated more like assistants than queens.

Last year, I discovered something called the Bechdel Test. Maybe you’ve seen it. The test challenges us to name films that have at least two female characters (with names), women who talk to each other about something besides men. I’ve seen enough films to know that only occasional exceptions pass the test.

But those exceptions have changed my mind and heart. Passion Fish, Metropolitan, The Last Days of Disco, The Double Life of Veronique, The Dreamlife of Angels, to name a few.

Transforming a community with a gourmet meal, the title character of Babette’s Feast transformed my understanding of art and erased my false belief that a barrier exists between the secular and sacred.

In Three Colors: Blue, Juliette Binoche plays the widow of a great composer—one of the most richly developed female characters I’ve ever seen. But how does Miramax sell the DVD? They splash the word Sexy! across the cover.

I recently interviewed Dr. Hee-sun Cheon, a therapist who spoke about her childhood love of theater.

“I was so into playing roles,” she said, “that I was able to learn how to take different perspectives. And that helped me develop empathy. So now, when I hear someone’s stories and struggles, my mind obviously understands, but my heart really goes through what they experienced.”

Hearing this, I recalled a Newsweek article—“The Creativity Crisis”—which said, “Preschoolers who spend more time in role-play (acting out characters) have higher measures of creativity: voicing someone else’s point of view helps develop their ability to analyze situations from different perspectives.”

I’m grateful to teachers who encouraged me to read stories about all kinds of characters—and, even more importantly, to write them—for blessing me in more ways than they knew. Considering the experiences of people who are different from me, I learn to feel as they feel, hurt as they hurt. I learn to love my neighbor.

Maybe that’s why I care about not just Indiana Jones but also Marion in Raiders of the Lost Ark, not just Aragorn but also Eowyn in The Lord of the Rings. I suspect it’s why I still enjoy the company of those lonely wives in Enchanted April.

My favorite big-screen character is an angel who falls to earth in order to discover human experience in Wim Wenders’ Wings of Desire. Watching him savor a cup of coffee as a sacred experience changed how I experience my ordinary day. And when he became enamored of a trapeze artist, listening to her thoughts with fascination, hypnotized by how she performed without a net, I shared his awe.

It’s how I feel as I watch Anne, my wife, as she gets dressed in the morning. As she reads rough drafts of her poems. As she drives at night, lights flashing across her face. As she moves through the garden gathering spinach, kale, peppers, and herbs that she has planted. It increases my sense of responsibility. And gratitude.

I pray that I never stop wanting to know her feelings and her mind.

Imagine a different kind of movie club. Without announcing the movie titles, I’d invite moviegoers into an experience quite unlike their own. On a men’s movie night, we might watch Eating—Henry Jaglom’s 1990 comedy in which women talk and talk about food, sex, and their self-image. Or A Room With a View. Or Enchanted April.

How many men would answer such an invitation? How many would cringe and slip out halfway through? Would they be prepared for what they might experience, how they might be humbled in the company of women?

May God bless the new husbands of my friends—Allison Backous and Kelly Foster—with vision, with listening ears, and with a lasting appreciation of the wonders they have found.

August 1, 2012 Loaves and Fishes
Recent Comments
4 Comments | Leave a Comment
""It doesn’t matter when you start the Sinatra Christmas playlist or put up your tree. ..."
C_Alan_Nault How to Win the War on ..."
"Yup."
Max Marvel Finding My Inner Calamity Jane
"I an confused by the use of "aural" here: "In The Gutenberg Galaxy, he explained ..."
William G II The Gutenberg Imagination
"My friend is looking for a Pepper Smith he served in the army with, was ..."
Christine Budnack The Love Song of Pepper Smith
Browse Our Archives
Follow Us!

Know Your Dogwhistles! Recognizing Anti-Semitism Is the First...
I have written before about how there is an antisemitism problem among...
view all Catholic blogs
What Are Your Thoughts?leave a comment
Copyright 2008-2017, Patheos. All rights reserved.