Seasons of the Soul 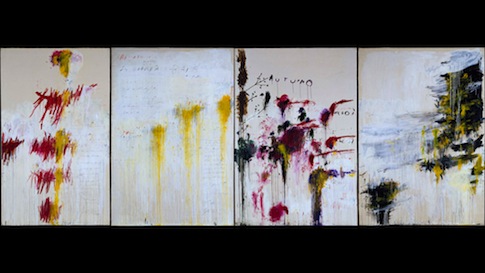 Every Monday, Wednesday, and Friday morning since August I’ve walked a long wooded path to reach the building where I teach College Writing to a group of freshmen.

Over the past four months, the landscape has changed. In August the heat of summer still lay heavily over everything, like a panting dog. The forest underbrush was so thick it looked impenetrable, and I couldn’t see whatever small animals made sounds within it, so that sometimes, when alone, I frightened myself by imagining someone was following me there, just a few feet away.

Though I took the same path each morning, I always noticed something I hadn’t before—something that surprised and delighted me. Once it was a hedge, maybe twenty feet long, covered in a delicate lacework of spider webbing, beaded with dew. Once it was a row of ground ferns, fanning out around a tightly spiraled middle. Once it was a tiny vine coiled around a fence post, sprouting what looked like dime-sized purple orchids.

The lower pond on campus was covered in a layer of water lilies so dense it was impossible to peer into the water. Sometimes turtles sat on them, their yellow-striped heads standing out against the green. The long branches of the willow trees on the bank drooped toward the pond and barely brushed its surface, like a leaning woman’s hair. The air was abuzz with insects and, it seemed, the sound of things growing.

Now, in December, the landscape is stark, all grays and sienna. The flowers have disappeared, and the hedge is bare. The lily pads thinned, then disappeared—the pond is now covered in the reflections of naked branches. The underbrush has thinned and reveals any plump squirrels it once concealed, so that now when I am walking alone, I cannot convince myself that I am not.

The air, thin and cold, is no longer abuzz. It is still heavy, but with silence and a kind of expectant anticipation, like before a snow. It is as if the world is waiting for something.

I have not been able to help, during this gradual turning of the seasons, a turn in my own heart—the onset of a sunless mood. My thoughts are more serious and sting a little, like sleet on skin. My pace is quicker, and not only because I’m cold and looking forward to a heated room.

Deciduous trees shed their leaves to save energy during the winter, when sunlight is scarce. They stop producing chlorophyll, and this is why the green drains from the leaves. Finally they dry and fall, so that the remaining energy can be used to preserve the body of the tree.

Something similar happens to humans as they approach death. I learned this on the day my grandmother died. The hospice doctor gave my family and me a list of signs to help us tell when my grandmother was reaching the end, and one was that her hands and feet would grow cold, as the body stopped circulating blood to the extremities, and sent it instead to her vital organs.

There were other signs, but this seemed the easiest to gauge. At intervals during her final evening, as visitors came and went, my aunts or cousins and I would covertly slip our hands beneath the blanket covering her hands and feet, and grasp them to feel their warmth. We wanted to know when they began to cool, though we were terrified of it. Anyone who didn’t know what we were doing would probably mistake it for affection—though in a way it was.

The changing seasons have been a symbol of death and resurrection since humans have had stories about such things. Perhaps most striking is that of Persephone, the goddess of vegetation during the spring and summer, during the cold half of the year she resides in the underworld as the queen of shades.

And because of this, we believe that we will survive our own winters, and that our souls will survive their own bare months and freezing stillnesses. I, at least, have to believe this—that the path I walk on will eventually thaw and warm, the branches bud and bloom.

December 9, 2012
Science and the Death of Philosophy
Next Post