The Hobbit on Steroids 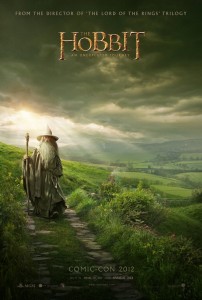 In a public library, there waited The Hobbit. And in a cineplex, there screened The Hobbit: An Unexpected Journey.

These two things are related. But only somewhat.

I vividly remember Mrs. Tuttle, a children’s librarian in Portland, Oregon, putting a book by J. R. R. Tolkien in my hands when I was only seven years old. The book began simply, introducing me to a hobbit and his habits. Bilbo Baggins was a likeable, fastidious fellow, fond of good food, smoking, and safety. I liked him. But he was clearly a little too comfortable and contented, lacking any interest in engaging the world beyond his neighborhood.

The excitement in Tolkien’s narrative began with the arrival of a wandering wizard on Bilbo’s doorstep. That led to a parade of unexpected visitors—dwarves gathering to plan their quest eastward into a dragon’s lair to regain their conquered kingdom. Bilbo became their reluctant accomplice, accepting the risky job of “burglar.”

He’d suffer a near-death ordeal at the hands of trolls, and recover among elves in the mysterious beauty of Rivendell. Captured by goblins, tested by a subterranean fiend called Gollum, and driven up into treetops to escape hungry wolves—this hobbit pilgrim’s progress intensified from one adventure to the next.

The movie, on the other hand, does things differently.

Filmmaker Peter Jackson, having already produced three massive Lord of the Rings films, knows we’re familiar with Middle-earth’s thrills, enchantments, and evils. Adapting The Hobbit—a small and simple prologue by comparison—he can’t resist the temptation to snatch the narrative away from the young children (and children at heart) for whom it was intended. He’s driven to burden it with the concerns, nightmares, and trials of that far-more-adult adventure.

His movie straps us to a rocket and launches us into a dramatic tale of Middle-earth history. We ride a rollercoaster through an ancient dwarf kingdom inside a mountain and the settlement called Lake Town on the water outside. Once we’ve glimpsed their glory days, we’re shaken by terrifically terrifying scenes of a dragon smashing the town and filling the mountain with fire.

Swords, shields, arrows, flames, screams, madness, chaos… death! And we haven’t even heard “In a hole in the ground, there lived a hobbit.” Not yet.

Having dazzled us with thunderous destruction, Jackson allows the movie to quiet down for Bilbo’s introduction to the wandering wizard. But the scene feels incidental, obligatory, just a chance for us to catch our breath.

The arrival of thirteen dwarves steers the movie back toward the novel’s playful richness. A lively bunch, they’re surprisingly distinct in their costumes, hairstyles, voices, and personalities. And when they sing a fireside song about their lost kingdom, there’s magic in that music, just as the book described, rising with sparks through the chimney into a starlit sky.

It’s one of three scenes that kindle genuine wonder, giving us reason to care.

The second highlight is Gollum’s riddle-game. Watching actors act, uninterrupted by vertiginous cinematography and violence, I felt like I’d stepped into another movie altogether. And the scene culminates in a show of compassionate restraint that Rings fans will recognize as a moment crucial to Middle-earth’s salvation.

The third involves enormous eagles. They were a welcome sight in Return of the King. Here, their powerful wingspans and talons are positively breathtaking.

But for each of these pleasures, there are several unnecessary, excessive scenes of crisis and inconsequential calamity. The visit to Rivendell doesn’t come until Jackson unleashes a vicious orc swarm to attack the dwarves. Later, they’re caught in a prolonged battle between “stone giants,” who appear only briefly in the book. Still, nobody seems capable of injury. Thus, there’s little suspense.

Worse, Jackson dreams up “the Pale Orc,” a nemesis for dwarf-captain Thorin Oakenshield. It’s about as unimaginative as anything these storytellers could have invented, staging an inevitable showdown.

Tolkien was better than this. The Hobbit never stooped to mere smack-down storytelling. Bilbo was heroic precisely because he saw typical warlike behaviors as madness.

“Saruman believes that it is only great power that can hold evil in check,” says Gandalf to Galadriel. “But that is not what I’ve found. I’ve found that it is the small things, everyday deeds of ordinary folk that keep the darkness at bay. Simple acts of kindness and love.”

Jackson seems unconvinced. He’s too fond of muscular power, drawn to show characters dueling instead of developing. He’ll seize any mention of strife in the story and exaggerate it into absurdity. (The dwarves’ escape from goblin captivity is a suspense-free amplification of Fellowship’s Moria sequence.)

Make no mistake—when it comes to proving himself the world’s greatest producer of fantasy spectacle, Jackson is four-for-four.

But where Tolkien served the head and the heart, Jackson serves the appetite for adrenalin rush. In this sense, he’s Bilbo’s opposite. He’s only comfortable doing what is outrageous and chaotic. For him, it would be a real adventure to delve into quieter moments, soul-searching, and a thoughtful sense of pacing and progress. But every time he takes one step forward, he stumbles two steps back into the familiar.

“All good stories deserve embellishment,” Gandalf tells Bilbo. That’s not true if embellishment contradicts (and even crushes) what made a story good in the first place. Presented in 3D—at the much-hyped forty-eight frames per second—An Unexpected Journey has more in common with amusement parks than literature.

A friend predicted that making The Hobbit into a trilogy would make the story feel like Bilbo himself felt when he said he felt “all thin … stretched … like butter that has been scraped over too much bread.” She was right. Just as steroids compromise an athlete’s integrity, Jackson’s injections compromise The Hobbit. Imagine what the inevitable extended edition will be like.

As fun as it is to watch, this is not Tolkien’s The Hobbit. That enchanting story of a peaceable traveler who knew the virtue of restraint is now lost to the vision of filmmakers who have none.