Can I Offer Up My Suffering?

Can I Offer Up My Suffering? March 8, 2013 Peggy Rosenthal 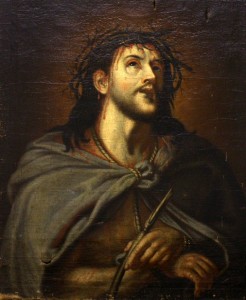 These were the words of my spiritual director, Fr. Bill Shannon, early in our twenty-five year relationship. (For background on our relationship, see this post.) I’d come to our monthly session after a couple days of a migraine. “I’m not good at accepting pain,” I told him.

“I’m not either,” he said, continuing with the words above, then adding: “We have to admit that there are some things we can’t handle, and accept our inability to accept!”

He went on: “Christ’s suffering on the cross is a mystery. Why is suffering necessary for redemption? And how is suffering redemptive? We don’t know. Jesus’s agony in the garden is passed over too quickly in most theology. Probably Christ prayed ‘let this cup pass’ for a very long time; he didn’t slip right into ‘Thy will be done.’ He didn’t desire this suffering; he didn’t see it as redemptive.”

Another time, when someone very dear to me—I’ll call her Angela—was suffering dreadfully from cancer, I told Bill that I was praying for Angela but not really understanding how intercessory prayer worked.

Bill gave a complex response; he was always cautious in talking about intercessory prayer.

“On the one hand,” he said pensively, “we are all connected with one another, living and dead. That’s the meaning of the communion of saints. But on the other hand, God isn’t into manipulative power; and prayer is not magic, it’s mystery. Anyone who feels clear and certain during prayer isn’t truly praying, because prayer is entrance into mystery. God probably feels as helpless before Angela’s suffering (before all suffering) as you do.”

Bill was firm: “God doesn’t will our suffering. Bodies are made so that suffering inevitably comes, but God doesn’t want us to suffer. We can pray for God to bring good out of it—but in itself suffering is senseless, meaningless.”

I pushed him: “How about when I’m suffering a little bit, like with a migraine, while Angela is suffering a lot. I’ve heard of offering up one’s suffering for another. What does that mean?”

“It’s a mystery, like intercessory prayer. It’s based on the faith that somehow we’re all one and that we can take on others’ suffering to relieve theirs. But how this works we don’t know.”

Years later, the subject came up again. By that time, Bill was dealing with an hour’s excruciating pain every morning on waking. “How do you bear it, Bill?” I asked.

He added, cautiously: “I’m more and more seeing all people linked in a flow of life, like a river, all of us one in God, so that, in a way we can’t ever prove empirically, it makes sense to imagine the possibility of taking on another’s suffering.”

On one of my final visits to Bill, when he was ninety-three and in constant pain as his body fell apart, we returned to the topic. Again I asked him how one offers up one’s suffering. This time his answer had a slightly different slant. He smiled wistfully as he said:

“I don’t know how, but I know it’s meaningful to me. It’s Christ on the Cross.”

I didn’t push him for more explanation. But back at home I reflected on what he’d said. I remembered how, decades earlier, Bill had called suffering meaningless. But now, through his years of great pain from arthritis, he had come to a deep personal relationship to Christ on the Cross—to Christ’s “offering himself up” in suffering for our sakes.

Now Bill found this meaning in his own suffering.

I’m not there—nor do I want to be. I remember Bill’s counsel of twenty-five years ago that it’s wrong to ask for suffering. But recently I’ve heard of the sufferings of so many friends and acquaintances…how can I not long for a meaning to their trials?

I recall Jack Gilbert’s poem, “A Brief for the Defense,” which my friend Richard Osler once sent me.

Sorrow everywhere. Slaughter everywhere. If babies
Are not starving someplace, they are starving
Somewhere else. With flies in their nostrils.
But we enjoy our lives because that is what God wants.
Otherwise the mornings before summer dawn would not
Be made so fine. The Bengal tiger would not
Be fashioned so miraculously well. The poor women
At the fountain are laughing together between
The suffering they have known and the awfulness
In their future, smiling and laughing while somebody
In the village is very sick.

And later in the poem:

If we deny our happiness, resist our satisfaction,
We lessen the importance of their deprivation.
We must risk delight. We can do without pleasure,
But not delight. Not enjoyment. We must have
The stubbornness to accept our gladness in the ruthless
Furnace of this world.

If I had read this poem to Bill, I know he would have nodded his thoughtful, affirming smile. Because once about fifteen years ago, when I told him I was focusing my prayers on being joyful, yet felt odd doing this in the midst of others’ pain, he’d responded:

“Suffering is a mystery. But so is praise! Joy in God’s saving work isn’t facile bubbling only when things go well; it’s the joy of trust in the darkness, too.”

March 7, 2013
The Wonderful Contradiction of Abstract Painting
Next Post

March 11, 2013 The Preacher’s Kid Returns
Recent Comments
12 Comments | Leave a Comment
""It doesn’t matter when you start the Sinatra Christmas playlist or put up your tree. ..."
C_Alan_Nault How to Win the War on ..."
"Yup."
Max Marvel Finding My Inner Calamity Jane
"I an confused by the use of "aural" here: "In The Gutenberg Galaxy, he explained ..."
William G II The Gutenberg Imagination
"My friend is looking for a Pepper Smith he served in the army with, was ..."
Christine Budnack The Love Song of Pepper Smith
Browse Our Archives
get the latest from
Catholic
Sign up for our newsletter
POPULAR AT PATHEOS Catholic
1