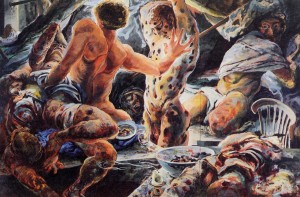 Image has just published its 25th anniversary issue (#80). We’re pleased today to run an excerpt from a symposium in that issue entitled “The Road Behind Us: Image’s Founding Generation,” in which we asked several writers and artists who have been part of Image’s community from its beginnings what they see as having changed over the years, whether there’s still a need for a venue like Image, and what our new calling might be.

Yes, the cultural landscape in America has changed dramatically since the 1980s. And building upon the previous brilliant, pioneering successes of a relative handful of remarkable writers—among them, John Updike, Annie Dillard, Denise Levertov, and Larry Woiwode come to mind—Image journal has been key to effecting dramatic change in the three decades of interim.

I believe that it was sometime in the fall of 1993 that I first learned of Image. I was gigging a Texas writers’ conference in San Angelo, and I met up with Virginia Stem Owens and her husband David who were also presenting their work. We hit it off, and—between readings, panel discussions, and other typical conference fare—struck up a series of conversations that led to what has been a continuing friendship. It was during that long weekend that Ginger first told me about this newish “Journal of the Arts and Religion,” suggesting I might send some work to Greg Wolfe, her then colleague at Newman University in Wichita, Kansas, and the editor and publisher of the magazine.

To be honest, I didn’t think I would be sending anything to Greg anytime soon. I had by then seen more than my share of literary journals attempting to bridge the chasm between art and faith, and in no previous case had I witnessed anything other than an acute diminishment of art, more often than not coupled with a cartoonish take on faith, to boot. That is to say, I was not expecting anything different along those lines.

Then I saw a copy of the new journal, Image Number 3, published the previous spring.

What I found was something far different than I had expected: actual art by Edward Knippers, actual fiction by Andre Dubus and Owen Barfield, actual poetry by Dana Gioia. There was also an essay on the art of Ed Knippers by the sculptor Ted Prescott, some of the best art writing I had ever read. What many others had attempted, Greg and Suzanne Wolfe were able to achieve.

Long story made short, I sent along some new work, and Greg was kind enough to accept a few of my “Recovered Midrashim of Rabbi Sab” for issue Number 5.

That much, as they say, is history. In the late 1980s, Greg and Suzanne Wolfe shared the vision of a culture that prized both genuine accomplishment in art and genuine religious faith. They thereafter provided—at great personal cost and sacrifice—an exemplary venue that has proven to be a continuing catalyst for bringing their beautiful dream into a beautiful reality. Not to put too fine a point on it: the journal itself was instrumental in bringing about the cultural change we have witnessed since then; artists of faith have been accepted, embraced, even, by the culture at large.

So—Greg has asked us to consider—what now? Now that the chasm between accomplished art and genuine faith has been significantly and convincingly bridged, now that the need for change feels somewhat less pressing and the disconnect between good art and good faith somewhat less acute, how might Image further assist both present and future artists of faith?

I may have a couple bright ideas along that line, but forgive a brief detour into anecdote—well, make that two anecdotes, which may well be related.

Anecdote One: By way of countless emails, sequential classrooms, frequent workshops, ongoing editorial duties, and the occasional quaint bit of snail mail, I come upon a good bit of writing by writers of faith—young and old and in between. Various as these works can be, various as the authors can seem, they appear often to share in two common errors: first, the premise that a writer is someone with a message to deliver, and, second, that the text is simply a means of delivery. That is, they appear to understand their vocation as presenting something primary (an agenda) by way of something secondary (a work of art).

How this has come to be I can only guess. A nostalgic fondness for allegory? A fear of imagination? A lack of respect for the stuff of creation? Maybe many years of bad instruction along the way, which has treated each literary text as a dressed up theme?

I’m guessing that the cause is some combination of the above.

All young artists—religious or otherwise—appear to have fallen prey to the error that their art is supposed to impart to others what that artist thinks he knows. Young Christian artists appear still to be most susceptible to mistaking art for a means of presenting their religious faith, albeit cryptically encoded in allegorical or symbolic terms.

Anecdote Two: Many of my students—even some English majors, even some graduate students hailing from the most prestigious universities in our nation—appear these days to be manifestly unskilled in shaping English sentences. They regularly misuse words, they love to yammer abstractly, and surprisingly often they fail to recognize when they have not quite produced a sentence at all. They don’t appear to give much attention to linguistic detail. These are the English majors, mind you. How has this come to be?

It could be that the latter-day fixation on expression—subcultural, ethnic, political, individual—has led them to privilege what is intended over how it is articulated. They give little attention to how the utterance is shaped on the page, and miss out on learning how good writing always says more than we mean to say.

Unduly enamored of intention, thus focused on some prior purpose, they fail to find how the act of writing—poring over words, phrases, and sentences as they are pressed to the page—is itself the means of the artist’s discovering new matter to share. The rule holds for all the arts—writers must love language, painters must love pigment, sculptors must love iron and stone, and musicians must delight in song; in this way, each medium duly attended becomes itself the agent of revelation.

I have a hunch that the great common flaw of mainstream American literary culture is not so much a lack of religious faith as it is a lack of faith in words—as such—accompanied by an ignorance of style. And I’m guessing that this curious phenomenon has left us with an odd generation of writers who cannot write.

They may wish to build new and great towers reaching to the clouds, but have no skill with stone, nor much in the way of stone. The new Babel of their creation is already rubble.

So, what might Image and its devoted crew do to assist the unskilled laborers of these slim constructions?

It’s time, I think, for artists of faith to cease hankering simply to be accepted by the mainstream galleries, writers, editors, and publishers. It’s time for artists of faith to recover their historical expertise in what makes great art great—an absolute ownership of every tool in the toolbox, coupled with a rich and enriching, dialogic relationship to the great art that precedes them.

This is our inheritance, and it is our calling.

Artists and editors both, raise the bar.

Scott Cairns is professor of English at the University of Missouri. His most recent books are Idiot Psalms and Endless Life. He has received a Guggenheim Fellowship and the Denise Levertov Award.

May 7, 2014 Christians in the Age of Sincerity
Recent Comments
0 | Leave a Comment
Browse Our Archives
Related posts from Good Letters