Made Whole Again: 25 Years of Image 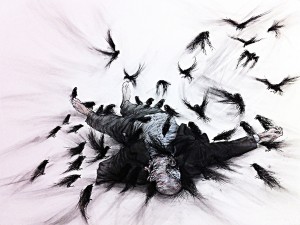 To celebrate Image’s twenty-fifth anniversary we are posting a series of essays by people who have encountered our programs over the years.

I am not the kind of Christian my parents wanted me to be. Case in point: I rarely call myself a Christian in public. These days it seems more of a political statement than I’d like it to be—and often not one I’d care to make.

I just don’t want the ordeal.

Any faith I could be said to have is troubled by doubt, such that most days I do not know where one ends and the other begins. This is not a new problem for me and hardly unique. It is not even, when you come down to it, a problem. It is simply the way of things.

Most days I feel I am a terrible Christian. And most days that’s exactly what I am.

You will protest. You mean well, of course, but you don’t know me like I know me. The human heart is not an easy organ to live with. “Our ticker,” writes poet Lisa Ampleman in the twenty-fifth anniversary issue of Image, “is not meat / and mainspring but measure and limit.”

I go to church sporadically, sometimes because I’m feeling philosophical about the whole affair, but most times because I’m lazy. I’ve broken nearly all of the Ten Commandments, in thought if not in deed. I frequently use God’s name in vain because, to be frank, it hits the tongue just right in a moment of need and because, when I don’t want to take the blame myself, or when I don’t know how else to account for the mysterious forces of life that lead to the myriad pedestrian tragedies of everyday life, God makes the perfect scapegoat.

Christ said: Do not judge. Go in peace. Give love freely.

I habitually fail at all three.

What kind of writer are you? people ask me.

A terrible writer, I want to say.

It takes me hours to compose a single status update, months to complete a blog post, years to finish a novel draft that is languishing with three final chapters to go. I’ll empty the crumb tray in the toaster or scrub the toilet or watch marathon back-to-back episodes of 90s sitcoms before I will sit in the chair and write.

And even then, once I finally manage to produce something, I regularly get the most basic kind of feedback: Your ideas are vague and abstract; your sentences too long and unwieldy; your word choice awkward, imprecise.

I am a beginner still.

“There is deep gladness,” writes Francisco X. Stork, “in the acceptance that what I do, poor as it is, will be my best” (Image #79).

I do not disbelieve this, but it is hard to keep faith in the gladness when mostly what one feels, day in and day out, is the abiding poverty of it all.

I am reminded of Annie Dillard’s telling of the Hasidic rabbi who left his house every morning convinced that he would die in fits of prayer. Or, similarly, the ritual slaughterer who every day left his home and his family in tears: Who knows what will become of me after I call on the Lord’s power and before I can summon the words for mercy?

All I know to say of the writing life, and of the life of faith—which for me are one and the same—is that to attempt to write, to attempt to believe, is to suspend myself, willingly and perpetually, in that split second of time wherein I might be saved or I might be damned.

And what compels me to this life of radical suspension is the very thing that continues to steel and sustain me for it: the devoutly artistic and doggedly interfaith work of Image.

For writers and artists whose creative work is deeply, perhaps stubbornly, informed by a religious or spiritual worldview, reading the pages of Image is like coming home. In Image we encounter a rigorous yet inclusive artistic community that strikes down the myth of a heart divided between a life of art and a life of faith (or doubt, as the case might be).

The work of Image, when all is said and done, restores us to ourselves. In its pages, we are made whole again.

He’s right, of course, but I reckon many of us might not be writing today if it weren’t for the community of Image. I certainly count myself among that number.

I hope I can prove myself worthy of the call.

After earning her Master of Fine Arts in Creative Writing at the University of Washington, Paige Eve Chant was awarded the 2010-2011 Milton Center Postgraduate Fellowship. She is currently at work on her first novel. Read more of her work online at www.paigeevechant.com.

July 17, 2014 Ovarian Cancer and a Circumcised Heart
Recent Comments
0 | Leave a Comment
"I miss that dragon the most finally it's here. 😳IJ.636PX.CO/c7234i"
Dmaned11123 Poetry Friday: “The Burned Butterfly”
"Ah, so now the imaginary War on Xmas is transmogrified into The War on Santa, ..."
David Miller How to Win the War on ..."
""Aural" refers to hearing, "visual" to seeing"
merphd The Gutenberg Imagination
""It doesn’t matter when you start the Sinatra Christmas playlist or put up your tree. ..."
C_Alan_Nault How to Win the War on ..."
Browse Our Archives
Related posts from Good Letters