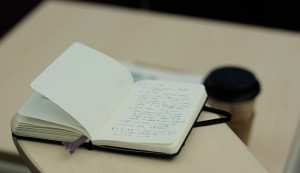 “It’s a funny feeling,” I confessed to an editor-friend as we worked on my first memoir, a book on calling. “In a few months perfect strangers will be able to read some of the most intimate stories from my childhood that even my closest friends don’t know.”

She nodded thoughtfully, her brow furrowed.

“And the conclusion I’ve come to is that strangers can know these stories about me and still not know me. They’ll still be strangers.”

I’d been talking about how, in memoir, we attempt to write ourselves into knowable form.

Along the way, I’d pondered the relationship between being “known” and being “possessed”—as one might say she “possesses” a thorough knowledge of the English language—and how this relates to story-telling.

“We are our stories,” Chess suggests, reflecting on the Israel-Palestine conflict. “The stories into which we are born, the stories in which we’ll one day die.”

That claim ought to be controversial. If Chess is right in saying that we are our stories, it could be argued, for example, that memoir is the intentional commodification of oneself.

This might be said not only of memoir but of other genres as well. William Zinsser once wrote, “Ultimately the product that any writer has to sell is not the subject being written about, but who he or she is.”

But there are some serious problems for this way of thinking about stories and writing.

It is troubling to suggest that the essence of who I am is something that can be bought and sold. As soon as I say that I am my stories, there is no reason why I cannot suggest that my identity can be known intimately by the writing and reading of my stories. And, in this act of knowing, possessed.

But people are not the type of thing that should be commodified, by their stories or otherwise.

Apart from this moral objection, there is also the epistemological limit of writing. No matter how talented the writer, there will always remain a portion of who she is that is incommunicable. As Dostoyevsky puts it: “There is something at the bottom of every new human thought, every thought of genius, or even every earnest thought that springs up in any brain, which can never be communicated to others…and with it you will die, without communicating to anyone perhaps the most important of your ideas.”

Even the most lucid pen will never be able to communicate all of the writer’s ideas—or stories.

Of course, in many ways, you still won’t know me. We are never reducible to our stories, and because of this, memoir should not be understood as self-commodification.

Surely, you say, the memoirist writes to be known. It’s true that one of the greatest human desires is to be fully known. It is the feeling of elation at finding someone who treasures just the sort of literature you do, for all the reasons you do. It is the experience the lover yearns for, longing to somehow pass beyond his skin, beyond even the skin of the other, in this act of embracing and uniting in one another’s essence.

But the memoirist writes not to be known so much as to know, and to help others know. To illumine by way of shared experience.

“The real subject of [memoir] is not self so much as human consciousness,” writes Elizabeth J. Andrew. “Self is simply a tool to access broader questions and themes.”

I will always be a stranger to you. We are all of us full of surprises, never fully known or possessed by way of our stories. We are always more than our stories. It is, in the end, only in the presence of the Author of all our stories that we are fully known.

But in being fully known, our stories are not left as they are. In Christ, God is re-narrating our stories of loss and failure and brokenness into what all of our most beautiful stories only ever point to: the world’s best dreams of coming home, of being made whole.

Ryan Pemberton is an author and freelance writer. He studied theology at Oxford University and Duke Divinity School. His first book, Called: My Journey to C.S. Lewis’s House and Back Again, is due out February 2015.

October 10, 2014 Pasternak: Artist and Holy Fool
Recent Comments
0 | Leave a Comment
"Ah, so now the imaginary War on Xmas is transmogrified into The War on Santa, ..."
David Miller How to Win the War on ..."
""Aural" refers to hearing, "visual" to seeing"
merphd The Gutenberg Imagination
""It doesn’t matter when you start the Sinatra Christmas playlist or put up your tree. ..."
C_Alan_Nault How to Win the War on ..."
"Yup."
Max Marvel Finding My Inner Calamity Jane
Browse Our Archives
Related posts from Good Letters