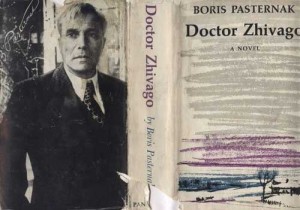 As I read the essay “The Writer and the Valet” in my latest issue of the London Review of Books, an image came to mind of a T-shirt I saw in one of the random catalogs that come in the mail. It was a simple black shirt with the sentence, “Artists make bad slaves” printed on it.

The essay by Frances Stoner Saunders is about how Boris Pasternak’s novel Doctor Zhivago came to publication, and it is a story filled with Cold War suspense and intrigue. It also parallels the novel itself—the story of an individual artist whose life and living are wrecked by revolution in his homeland.

Pasternak was born in 1890 into the home of an artist father and pianist mother. Artists and musicians frequented his parents’ home, including the likes of Sergei Rachmaninoff. Pasternak himself started his studies in music, switched to philosophy, and then found his calling with poetry. He was a poet who loved botany, and was, according to Alan Furst in his review of The Zhivago Affair, “above all else, a poet of the human spirit, a poet in love with a world of weather, landscapes, romance and the Russian soul.”

After his poetry collection Second Birth was deemed unacceptable by the authorities, he was forbidden to publish and turned for a living to translating great works of literature. He initially tried to go through proper channels to have Doctor Zhivago published in his beloved fatherland and he was denied.

Pasternak was relocated by the authorities to a village near Moscow where Stalin had corralled Russian writers in among government watchers. It was more, Mr. Furst explains, than just a matter of keeping an eye on the possible thought criminals: “After 1917, nearly 1,500 writers in the Soviet Union were executed or died in labor camps for various alleged infractions.” Pasternak’s writer friend and next-door neighbor Boris Pilnyak was one—he got a bullet to the head one night. Isaac Babel was one of these doomed writers as well.

Furst writes that Pasternak originally supported the revolution, but became disenchanted with the brutality of the Bolsheviks. As for his writing, he knew that “the Soviet publishing world would recoil from the alien tone of [the novel], its overt religiosity, its sprawling indifference to the demands of socialist realism and the obligation to genuflect before the October Revolution.”

Pasternak refused to neuter his work to meet the stark demands of socialist realism—the only government sanctioned genre. According to Peter Finn, writing for The Washington Post, he “had long displayed an unusual fearlessness: visiting and giving money to the relatives of people who had been sent to the gulag…intervening with authorities to ask for mercy for those accused of political crimes…refusing to sign trumped-up petitions demanding execution for those designated enemies of the state.”

“Don’t yell at me,” he once told a group shouting him down for asserting that writers must not be told what and how to write. “But if you must yell, at least don’t do it in unison.”

According to newly declassified documents, the CIA saw Zhivago as a fantastic propaganda tool against the Soviets. Fighting Soviet oppression was a noble goal, and like another great Russian character, Rodion Raskolnikov, the Americans were not opposed to stepping over corpses to reach their goal—what was another dead writer on such a large pile already? If Pasternak was a holy fool willing to take a bullet for his art, the CIA was certainly willing to usher him along as it suited their purposes. When he secretly passed the manuscript along to an Italian publisher he said, “You are invited to my execution.”

That Pasternak survived while so many didn’t has raised questions about how brave he actually was, as well as questions about his relationship to Stalin. Michael Scammell writes that once when the writer’s name showed up on an execution log, Stalin told them to leave the “holy fool” alone.

The Russian holy fool, the yurodivy, appears foolish to the world because the fool is focused not on the world but on a transcendent reality. Holy fools cannot be bothered with the mores of society, and when they do look to the world, their vision is colored by their transcendent vision.

One famous example is Nicholas of Pskov who confronted Ivan the Terrible after the Czar had massacred thousands, destroyed homes and farms, and sacked monasteries. The holy fool Nicholas called Ivan out publically. For emphasis, the fool pulled out a piece of bloody, raw meat and slapped it into the Czar’s bare hand.

Some say that artists cannot fit into this category, the holy fool, but I disagree with such pedantry. Pasternak wanted to concern himself with the transcendent instead of the harsh affairs of Soviet Russia. He wanted to see through to eternal, lasting truths, and came under criticism for it. “He is shirking his responsibility,” his critics said. “He should be fighting the good fight and yet he looks beyond the suffering of humanity. He has his head in the clouds.”

Pasternak did not write Doctor Zhivago for it to be used as propaganda. He was a poet who penned a lyrical and grand epic novel, and in doing so ended up also depicting the harsh realities of Soviet Russia in his novel, which won the Nobel Prize in 1958.

He had expected to be shot, or sent to a gulag, or at best exiled. Instead, the Soviet authorities forced him to decline the Nobel Prize, and kicked him out of the Union of Soviet Writers, which stripped him of his right to earn a living even as a translator. He lived out the rest of his life under state oppression and in poverty.

Still he refused to kowtow. He was an artist and a holy fool. Both make bad slaves.

October 13, 2014 The Iron Cross: An Observation from the Way of Saint James, Part 1
Recent Comments
0 | Leave a Comment
Browse Our Archives
Related posts from Good Letters