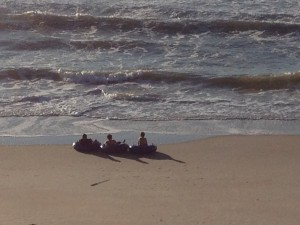 My sons argue over Avengers characters. The littlest insists he’s Captain America. Another claims Hawkeye. There’s an argument over Ironman. They resolve it by awarding that honor to me, given that I’m a smartass and look a little like Robert Downey, Jr.

I argue that I’m the Hulk. I flex my muscles. They roll their eyes, but their mother would understand. She told me once, not long before our divorce, that I am the angriest man she’s ever known. A therapist once told me I’ve been angry since childhood. Another said I’ve been depressed my entire life, like my mother before me. I told him about the first diagnosis. He shrugged his shoulders. Flight or fight, does it really matter when your enemy is yourself? That’ll be 100 dollars.

I don’t remember if October was when the weight always came closest to leveling me, or if that cycle commenced after my daughter died. I suppose no matter which therapist was correct: I’ll always have something to blame my mother for, because she died in October as well.

And here we are again, the days growing shorter and this melancholy that is like a musty rug draped over my shoulders. Sometimes the form it takes is dread, and this too is a weight, but on the inside. It spreads through my bones and lays hold of my brainstem.

My daughter died that way, the tendrils of a tumor curled around and through her brainstem. I used to pray that God would take me the same way, so I could see her sickness to the finish, having carried her until I could no longer follow, until her heart fell silent and mine inexplicably did not. I know it’s an odd and morbid wish, but my constant prayer all those months of her suffering was that it would pass from her to me, and I suppose some part of me never stopped praying that.

There is no pain now, but this familiar dread has once again gripped me so that any motion or sound sets my nerves to vibrating as if they are a web, and this sickness in me the spider.

“Why won’t you take medication?” My ex-wife asked me this once, exasperated. My answer was laughable: I fear it will destroy my craft. Me: obscure essayist, author of a failed memoir, peddler of an unsold novel, who only writes well when he shimmies down the reticulated innards where that spider lives and tries to describe what he sees there.

But wouldn’t it be worth it, she asked, to be well? Is your writing that important? She was too kind to say so, but she might reasonably have added: Will anyone miss it?

We are at the beach and my younger sons have stepped up to the waves’ edge where they stand defiantly and survey the sea. They take tentative steps into the chilled and turbulent waves and as always I quell irrational fears, compounded because I am strung out, at the low-end of the cycle, where people who love me try to help and can’t understand that there is no helping, there’s just letting me ride it out.

My irrational fears, as my children inch forward into the water, are all you can imagine but probably don’t clench your own fists over: sharks, rip tide, skin cancer, rusted fishing hooks in the sand, anaphylactic shock from a jellyfish.

Explaining to me the low odds of each is like telling an asthmatic to breathe. I understand probabilities.

There are 74 million children in the U.S., and about 11,000 will be diagnosed with cancer this year. Approximately 1,900 of those will be cancers of the brain and central nervous system, 238 of which will strike the brainstem. One hundred and ninety of those brainstem cancers will be a death sentence. One hundred and ninety out of 75 million. You are three times more likely to be struck by lightning than watch what happens to your child’s body as her brainstem splinters in slow motion.

See? I know how the goddamned probabilities work.

My children are in the water now and my stomach is knotted and I remember the feel of her cool skin where she lay on my chest after playing in the waves on a beach not far from here. Given the motion of air and water and the size of molecules, there is some probability that a tiny portion of the water in which my living children play once touched the skin of my child who is dead. In this they are nearer to her than I.

Something I learned, back when I used to step into a ring and try to hit more than I got hit, was that the beating is worst when you stop moving. “As long as you’re moving,” that Marvin Gaye song goes, “there’s always a chance.” Maybe he said “grooving.” Doesn’t matter, right now I’m doing neither.

So I force myself out of this chair, onto the beach. This is not the equivalent of an asthmatic deciding to breathe. Please don’t print this and show it to your depressed loved ones and urge them to follow suit. This is me, on this day, and I don’t know how, only that today I can do it.

Onto the sand, into the water, and now like my sons I am precariously balanced, each of us trying to ride the waves and being swallowed, getting smashed into the sand, but trying, trying, slogging back into the surf while our limbs will bear us, because on this day we can, and because we are alive and we are together, and whatever tomorrow holds is for God and the calculators of probabilities, but not for us, not for us, please God, if only just a little while, not for us.

October 28, 2014 The Trouble with Time
Recent Comments
0 | Leave a Comment
""It doesn’t matter when you start the Sinatra Christmas playlist or put up your tree. ..."
C_Alan_Nault How to Win the War on ..."
"Yup."
Max Marvel Finding My Inner Calamity Jane
"I an confused by the use of "aural" here: "In The Gutenberg Galaxy, he explained ..."
William G II The Gutenberg Imagination
"My friend is looking for a Pepper Smith he served in the army with, was ..."
Christine Budnack The Love Song of Pepper Smith
Browse Our Archives
get the latest from
Catholic
Sign up for our newsletter
POPULAR AT PATHEOS Catholic
1