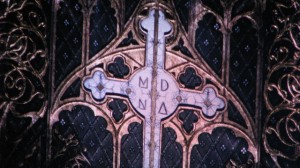 The entrance makes all the difference.

I recently watched the opening of a Madonna concert, mostly for the same reason that I struggle not to crane my neck when driving past an accident. It was her MDNA tour, which is a clever title when you think about it, because MDMA is an acronym for the drug known as ecstasy, while MDNA evokes the sacred genetic strands that constitute the entertainer known as Madonna.

Her clever set designers put those letters to further use by stationing them around the intersection of a large cross, where once might have gone the letters INRI, signifying the Latin for “Jesus of Nazareth, King of the Jews.”

Madonna of Bay City is herself a kind of royalty, perhaps not equal in circumstance to the deity with whose trappings she adorns herself, but certainly surpassing him in pomp.

On the stage preceding her appearance, figures cloaked as monks moved in obscure ministrations around her cross, loudspeakers poured out something resembling ancient hymns, and gigantic censers sent dry-ice vapor coiling toward the rafters. A beat began pounding through the fog, the crowd reciprocated, and the monks threw off their robes, revealing themselves shirtless and oiled, more Chippendale than cenobite.

Then Lady Madonna appeared to her enraptured followers. Flanked by her acolytes, she bumped, she grinded, she shook her fifty-six-year-old moneymaker. She stood before her cross, amidst her swinging censers, where seconds before the air had thrummed with Byzantine chants, and she declared with full-throated conviction that bad girls want to have fun.

That’s it. No incendiary rage against the machine of industrial capitalism, no lament for what’s going on in the inner city, no rebuke of a glamour-queen cast out like a rolling stone—just a randy remix of a point Cyndi Lauper made quite aptly thirty years ago.

“I’m unhappily convinced,” wrote William Alexander Percy in Lanterns on the Levee, “that our exteriors have increased in importance while our interiors have deteriorated: it is a good paint job, but the lighting and sanitation are execrable. A good world, I acknowledge, an excellent world, but poor in spirit and common as hell.”

If hell is absence of the heavenly then we’re wallowing in it. Percy labeled it a disease that “eats to the marrow,” and surely that is us: marrow-rotted and common as dirt, leaning Godward when it suits us or when we have no practical alternative, but always with the intention of making him relevant, as if what pleases us is what’s divine, as if we got here first and he is the one who ought accommodate himself to us, as if we are owed.

The entrance makes all the difference, and as our imaginations have become smaller, our words duller, our lives coarser, we have made everything around us more voluminous—our homes, our cars, our music, our ceaseless chatter—all so we might feel significant, having mistaken small for insignificant. What worth is there in anything small and weak as man?

What good can come from Nazareth?

We have pumped up the volume for fear of the silence, and we are drowning in it, we are made smaller by it. But there’s a blessing in the smallness, in all of us feeling like we, too, stand outside the inn, no matter how fashionably we dress or confidently we speak, because who among us hasn’t suspected he does not belong, that no matter how he molds and fits himself to the vulgarity of the age, he will never really be at home in it?

We are cast out in spite of ourselves and the virtue of being out here is the silence. The silence, if we can shut up long enough to hear it. The terrible silence, the silence that is necessary if we are to discern the earth-stepping God who could have come as a whirlwind but chose otherwise.

We light up this season like a distress signal, and we are all of us awaiting something, aching for something. This ache is so big, we imagine only a big remedy will do. We forget how everything metastasizes in a vulgar age—our prayers, our churches, our decorations, our gifts, our hungers. This damnable hunger that is a cancer.

And so it’s an odd and small remedy to leave the cast-off light of the inn and climb cave-ward, to ascend to the mountain of the Lord and stand in his holy place: an animal stall, a den of hay and shit made holy, and perhaps even the likes of you and me with it, because the entrance makes all the difference, the entrance of God into the hell we’ve made.

The entrance makes all the difference, the entrance of God into the world and into us, and we into something bigger, thank God, than ourselves.

Tony Woodlief lives in North Carolina. His essays have appeared in The Wall Street Journal and The London Times, and his short stories appeared in Image, Ruminate, Saint Katherine Review, and Dappled Things. His website is www.tonywoodlief.com.

December 3, 2014 Angel Trades a Shotgun for a Shovel: An Interview with Terry Scott Taylor, Part 1
Recent Comments
0 | Leave a Comment
""It doesn’t matter when you start the Sinatra Christmas playlist or put up your tree. ..."
C_Alan_Nault How to Win the War on ..."
"Yup."
Max Marvel Finding My Inner Calamity Jane
"I an confused by the use of "aural" here: "In The Gutenberg Galaxy, he explained ..."
William G II The Gutenberg Imagination
"My friend is looking for a Pepper Smith he served in the army with, was ..."
Christine Budnack The Love Song of Pepper Smith
Browse Our Archives
get the latest from
Catholic
Sign up for our newsletter
POPULAR AT PATHEOS Catholic
1