Angel Trades a Shotgun for a Shovel: An Interview with Terry Scott Taylor, Part 1 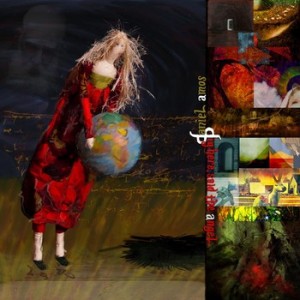 Most bands with lifespans of forty years or more have—at some point, and with a certain sort of gracelessness—rolled downhill from the summits of their celebrated careers like stones in search of more peaceful musical pastures where they can gather moss. Not so with Daniel Amos.

In 2013, thirty-nine years after forming, the band also known as D. A. released an album as good as—maybe even better than—anything it had ever unleashed upon the world before. With frontman Terry Scott Taylor baring his soul and sometimes his teeth, and wisecracks and wisdom never far from one another, the record found Daniel Amos at the peak of its powers once again.

The title? Dig Here Said the Angel. The second album in the band’s catalog to reference a celestial being after 1977’s seminal Shotgun Angel. Sometime after reviewing the album for “Good Letters” last November, I resolved to interview Taylor in 2014 in hopes of understanding more of the Daniel Amos story. Here is the result of that opportunity.

Chad Thomas Johnston: One of the things that makes Dig Here Said the Angel so strong—and something that is also present throughout Daniel Amos’s discography—is the way you write about spiritual things. So many Christian writers veer into propaganda, but you have a gift for writing poetically, profoundly, and even humorously about your spiritual preoccupations. Would you be willing to talk a bit about your approach to writing about theological things?

Terry Scott Taylor: There is a line in the song “The Uses of Adversity” (on Dig Here Said the Angel) that makes reference to our inability to fully grasp the profound nature and ways of God. It says “You’re much too small if you’re not a mystery.” My lyrics often contain a certain lack of directness and certitude because I’m often trying to express those things that are essentially inexpressible.

While God isn’t confined solely to the words used to describe him or his actions, as a Christian I do believe that God’s true and essential nature is revealed in Jesus of Nazareth, who said, “If you’ve seen me, you’ve seen the Father.” So I’m obviously not saying that there’s absolutely nothing about God that can be known, or that nothing that can be said about him using simple, plain, linear sentences, and therefore there’s no use in even trying to say anything about Him.

But I will say I enjoy engaging the imaginations of my listeners by sometimes taking a kind of out-of-left-field approach. By poetically restating old, familiar truths in a new and unique way, I hopefully will enable the listener to hear with fresh ears something he or she may have heard or read a thousand times before but which, through repetition, has lost its power to inspire passionate commitment to whatever principals or directives it’s concerned with. Of course, while God’s Spirit is ultimately responsible for these things, lyrics can be used by the Spirit as a springboard into action.

All that being said, my first duty as a songwriter is to write a good song. I’m an artist, not a theologian. Hans Rookmaaker said, “Art needs no justification,” and I would agree. However well-intentioned, I despise musical bait-and-switch intended as religious indoctrination.

The idea that it’s the Christian artist’s duty to only write utilitarian “Gospel” songs as a means of “converting” the listener, or “uplifting” the believer, or the idea that a song’s worth is directly proportionate to its power to propagandize, is repulsive to me.

CTJ: Let’s talk about some of the lyrics on Dig Here Said the Angel. One of my favorites is “We’ll All Know Soon Enough.” Would you be willing to unpack that song for the readers of “Good Letters”?

TST: “We’ll All Know Soon Enough” has a pretty simple message: Life is short. I’m now a passionate believer in that tired, old cliché. Believe me, at my age you learn almost nothing is truer.

The song is my attempt to level the playing field with believers and non-believers as well by saying, “Whatever your views on religious matters, since life is short you’ll have your answers in the not-so-distant future.” In writing, “There may be no Heaven, there may be no Hell,” I’m acknowledging what may be the listener’s point of view and saying essentially, “Well, if there is a Heaven and a Hell, you won’t have to wait long to find out, because death comes relatively soon to all of us.”

CTJ: So there won’t be anything for believers and unbelievers to argue about anymore—I love it, Terry. Ha!

Now I want to ask you about something I saw on the band’s website—it says you began writing your memoirs at some point. Do you plan to publish them? I, for one, would love to read them. Would you be willing to describe what readers might expect to encounter in your memoirs?

TST: Actually, many years ago I began writing a series of essays based primarily on childhood memoirs. For me, prose writing is a terrible taskmaster because I’m slow and never satisfied. God willing, I’ll get it done before journeying “beyond the wall of sleep.” The clock’s atickin.’

CTJ: Do you guys plan to tour in support of Dig Here?

TST: A full-band tour (at least at this point) is very unlikely because of our various schedules and life circumstances. I may eventually do something stripped down with a few of the guys because I’d love to do live versions of the songs from the new record—along with the “oldies,” of course. But I can’t say there is anything in the works at this point. Of course, I thought it highly unlikely we’d tour again after we officially stopped touring several decades ago, but it happened nonetheless, which I still consider a small miracle. So who’s to say it won’t happen again? Miracles still happen.

Chad Thomas Johnston is a slayer of word dragons who resides in Lawrence, Kansas, with his wife Rebekah, their daughter Evangeline, and five felines. He has written for IMAGE Journal’s “Good Letters” blog at Patheos.com, In Touch magazine, The Baylor Lariat, and CollapseBoard.com. Johnston’s writing debut, a whimsical memoir titled Nightmarriage, was a finalist for a 2013 Shirley You Jest! Book Award in nonfiction writing.